A Note About the Windows Productivity Apps and Your Microsoft Account

Before we can discuss the individual productivity apps that are considered part of the full Windows 8 experience, you need to be aware that many of these apps–including the core People, Mail, Calendar, and Messaging apps–all rely on connectivity with your Microsoft account, or what used to be called a Windows Live ID. You may recall from previous discussions in this book that we strongly recommend using a Microsoft account for your sign‑in with Windows 8 instead of an old‑fashioned local account because that former account type provides such useful integration capabilities. But we realize that some of you will ignore this advice, either because you feel you know better or because you simply don’t have a choice, perhaps because the Windows 8 PC you’re using is supplied by work or for other reasons.

Don’t confuse “connected” with “online.” Some of these apps do work when the PC is offline. But they all rely on online services, not local‑only data.

If that’s the case, the first time you launch People, Mail, Calendar, or Messaging, you will be asked to sign in to your Microsoft account, as shown in Figure 8‑1. There is no way to use these four apps otherwise, because they are, by nature, what we call connected apps , or apps that offer no disconnected‑only experience. (Microsoft calls them communications apps.)

Microsoft first took this approach with Windows Phone back in 2010, and it was somewhat controversial at the time. Some users, familiar with local personal information stores like that provided by traditional Windows applications such as Microsoft Outlook didn’t understand the benefits of centralized, cloud‑based data storage, or were perhaps suspicious of such services or unwilling to change. With Windows 8, however–and with Windows Phone 8 as well, for that matter–Microsoft has leapt firmly into this connected future. And while you’re still welcome to use old‑fashioned applications that lock data to a single hard drive on a single PC, the software giant won’t help you do so with its own Metro‑style apps in Windows 8.

We recognize that this will still be somewhat controversial with an increasingly smaller group of people who resist change for whatever reason. But we also believe that Microsoft’s approach with Windows 8 is correct. And having long ago adopted this cloud‑based model, we’re excited to access our data from anywhere now using Windows 8. We suspect most of you are as well.

When you sign in to Windows 8 for the first time with a Microsoft account, a number of interesting things happen behind the scenes, including the ability to sync settings between PCs. But Windows 8 also provides this account information to apps, including the core productivity apps that one might want to use with an online account, like Mail, Calendar, Messaging, and People. That latter app, based on the People hub that appeared first in Windows Phone, is Windows 8’s new contacts management app. And it provides a nice interface for aggregating the contact lists from multiple accounts, providing a single view into them all, and thus for all the people you know and interact with each day.

The People app is shown in Figure 8‑2.

Figure 8‑2: The People app helps you manage your contacts. 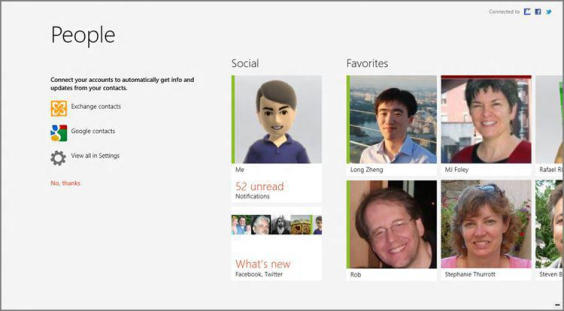 This app is called the People hub on Windows Phone, but it looks and works similarly.

The People app also provides a nice, Metro‑style view of all of the activities that your contacts are doing online, culled from the various feeds that are associated with their accounts. This can include sources such as Windows Live, Facebook, Twitter, and more, and includes the ability to comment on what others are doing.

Finally, you can also use the People app to view and edit your own online persona, which is the way other people view you out in the world.