In Windows 8, the desktop environment is treated like an app, and you should find a Desktop tile somewhere on the Start screen. (If you don’t, you can use Start Search, described in the next section, to find it.) When you tap the Desktop tile, the familiar desktop interface appears, as shown in Figure 3‑10. 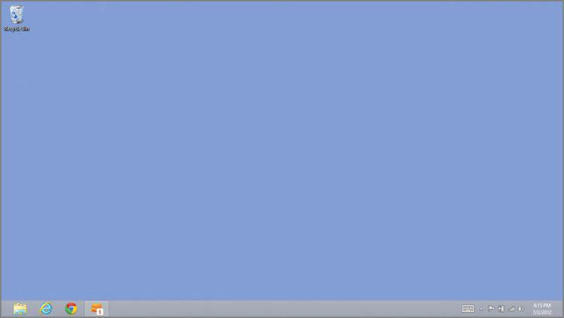 The Windows desktop looks and works much like the desktop in Windows 7, but with a few differences. The biggest is that the Start button and Start menu are missing: Windows 8 has replaced the old Start menu with the new, full‑screen Start screen, so the Start button is gone. You will typically use the Windows key, Windows key button, or the other methods described later in this chapter, to access the Start screen.

With just a few exceptions, all of the built‑in Windows 7 applications and utilities–Paint, WordPad, Windows Media Player, and the like–are included in Windows 8 as well.

Other than that, things work as before. You can run traditional Windows applications, in windowed or full‑screen mode, install new applications, and so on. Chances are if it worked in Windows 7, it will work fine in Windows 8 as well.