Most people who use the Xbox Video app aren’t going to have large video collections they’ve ripped from optical media. Instead, and in keeping with the modern design of the Metro environment in which it runs, Xbox Video operates as a front end for Microsoft’s Store back end, in this case with the TV and Movie Stores in particular.

You’re probably familiar with how such stores work thanks to previous experience with Apple iTunes and other e‑commerce destinations. But Microsoft’s online efforts, perhaps not surprisingly, offer some advantages.

First, the basics. Microsoft offers both TV shows and movies for purchase, and movies for rent. Some of this content is available in a choice of standard definition (SD) or high‑definition (HD) formats, where the latter is more expensive but looks better on higher resolution screens. Videos rented or purchased from Microsoft work with the Xbox Video app, Windows Media Player, and Media Center in Windows 8/RT, with the Xbox 360, and on Windows Phone, too. And, as with music, Microsoft unfortunately uses Microsoft Points for its video sales, so you’ll be doing some math.

Intriguingly, you’re given some choices when you buy or rent videos. That is, you can stream the video directly to the current PC or device, bypassing the need to download it before watching it. But if you do want to watch the video later offline (say, on a plane), you can choose to download if you prefer. But you can also simply just make the purchase and then not watch the rented or purchased video at that time. Later, you can access the video content from a Windows 8/RT PC or device, or the Xbox 360, or Windows Phone, and begin watching as you please.

This choice is pretty liberating, and you may find yourself queuing up a few movie rentals for the weekend on your Windows 8 tablet but then watch them at home via your Xbox 360 and HDTV. Or you could stream part of a purchased movie on the 360 and then finish watching it in downloaded form on your Windows 8 tablet on the way to work the next morning (assuming you commute by bus or train, of course).

And in case it’s not obvious, content you purchase is yours forever, for the most part. This content is associated with your Microsoft account, and anytime you access the Store–from Windows 8 or the Xbox 360–you can browse through your previous purchases, or simply go to an item directly in the marketplace and start streaming it immediately: Instead of a Play/Rent button, you’ll just see a Play button.

The Movies and Television Stores work a bit differently than does the Music Store in Xbox Music, providing you with a true front end to the whole store experience. But content selection works as it does in Xbox Music: When you select a movie, for example and as shown in Figure 9‑45, you’ll see buttons related to buying and renting the film, movie information, Play on Xbox 360 (when available), and to playing the trailer.

Figure 9‑45: Options associated with movies in the marketplace 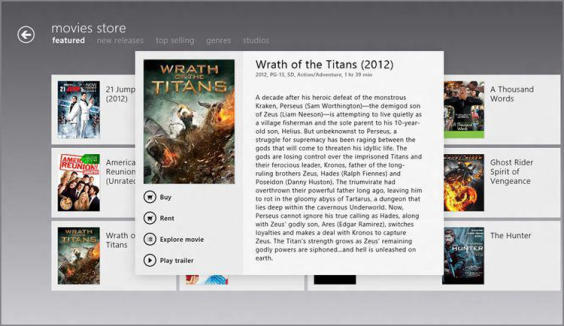 Because TV shows feature multiple episodes across multiple seasons, the Store provides a slightly different layout. When you select a TV show in the Television Store, you’ll only see a few choices, including View seasons and Explore series. When you select the former, a new full‑screen view appears, offering information about the show plus links to each of its seasons, as shown in Figure 9‑46.

When you select a season, a pop‑up appears, as is common in the Xbox Music and Video apps, providing links for each episode in the season. Select an episode and you’ll see buttons related to buying the episode and, depending on the content, playing it on the Xbox 360. This can be seen in Figure 9‑47.

The renting and purchasing experiences differ a bit, and for reasons that are best left to the imagination, not all video content is available in both HD and SD formats, so you may not have that choice. When you do, you’ll see a screen like that in Figure 9‑48, letting you choose between both quality sizes and either streaming or download.

Figure 9‑46: A set of tiles related to a TV show’s different seasons 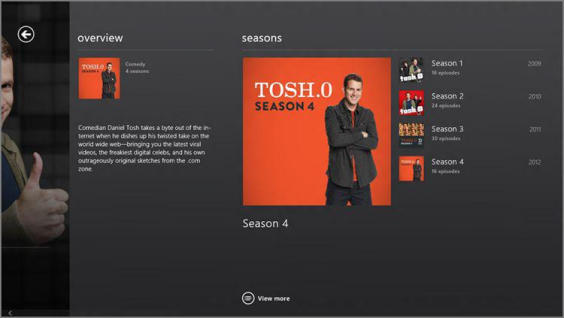 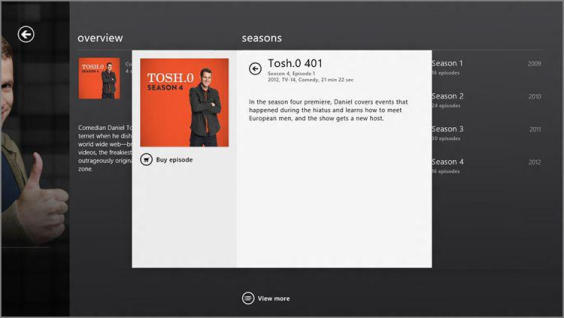 When you purchase a TV show, you will also see different choices. There are no TV show rentals, but you can choose to purchase shows in SD or HD (when available), and you always get both download and stream availability. You can also choose to buy a Season Pass, which provides all of the episodes in the given season in a batch, including those seasons that are still in progress. You will see the same HD and SD choices as you do with movies, assuming those options are available for the title you selected.

Figure 9‑48: You will often see choices between HD and SD, and between downloading and streaming.