A:Excuse me, can you tell me the way to Red Square?

B: Sure. Go down this street two blocks straight ahead and you’ll see the Kremlin Stars.

A:Thank you very much. Is there a bus?

B: No, there isn’t. There is a trolley-bus. The stop is over there.

A:Well, I see a crowd of people there...

B: At rush hours the trolley-buses are overcrowded. I advise you to walk. It’ll take you a quarter of an hour.

A:Thank you very much. I’ll follow your advice. And how can I get to the railway station, please? Is it far from here?

B: You must take the underground. You can see it from here.

A:You have been most helpful. Thank you.

B: Don’t mention. Have a good time! 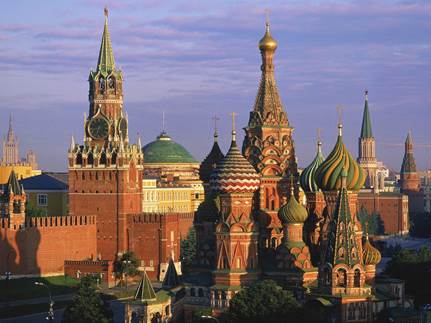 Moscow is the capital of Russia. It is the largest city of our country and one of the largest cities in the world. More than 8 million people live there.

Moscow is situated in the valley of the Moskva river. It was founded more than 850 years ago by prince Yuri Dolgoruki. Moscow is a political, administrative, economic, industrial, educational and cultural centre of the Russian Federation.

Moscow is the seat of our Government. President of Russia lives and works there. The heart of Moscow is Red Square. All the ceremonies are held here.

The Kremlin is the oldest historical and architectural centre of Moscow. The Moscow Kremlin and St. Basil`s Cathedral are the most beautiful masterpieces of Russian architecture.

There are many other places of interest in Moscow. A lot of historical monuments, museums, art galleries and theatres are there in the city. The Historical Museum, the State Pushkin Museum of Fine Arts, the State Tretyakov Gallery are known all over the world. The Bolshoy, Mali and Art theatres are famous too.

During its long history Moscow was exposed to several invasions. In 1237 it fell under the power of the Golden Horde. In 1612 Moscow was occupied by the Polish invaders but they were defeated by the national levy headed by Minin and Pozharsky. The army of Napoleon entered Moscow on September 15, 1812. In 1941 the German armies were defeated not far from Moscow. For heroism of the working people of our capital during the Great Patriotic War Moscow was awarded the title of Hero-City.

Moscow is the port of five seas. Four airports connect Moscow with other parts of our country and many other countries. There are 9 railway stations in Moscow.

Moscow is a city of students. The Academy of Sciences of Russia is also in Moscow.

Every day about one million people come to hospitable Moscow from all over Russia and other countries.

1. What is the capital of Russia?

2. Where is Moscow situated?

3. When was Moscow founded?

4. What is the population of Moscow?

5. What is the heart of Moscow?

6. Are there many places of interest in Moscow?

7. Was Moscow exposed to invasions during its long history?

8. What was Moscow awarded the title of Hero-City for?

9. How many airports are there in Moscow?

10. How many railway-stations are there in Moscow?