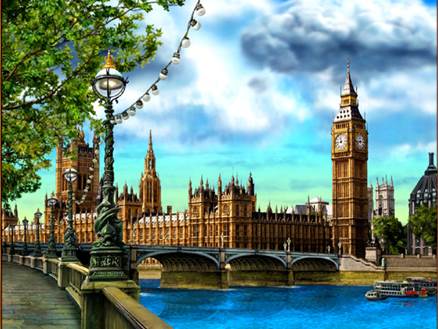 The United Kingdom of Great Britain and Northern Ireland (the UK) consists of four countries which are: England, Scotland, Wales and Northern Ireland. Their capitals are London, Edinburgh, Cardiff and Belfast. The UK is one of the world’s smallest countries. The country is washed by the Atlantic Ocean, the North Sea and the Irish Sea. There are many rivers in Great Britain. The longest river in England is the Severn, and the deepest is the Thames, on which the capital of Great Britain, London, stands.

English is the official language. But it is not the only language which people use in the UK. Some people speak Scottish, Welsh and Irish.

The population of the United Kingdom is about 60 million people.

The climate in the UK is generally mild and temperate due to the influence of the Gulf Stream. The weather is so changeable that the English say that they have no climate but only weather. It is never too hot or too cold. It rains very often. Snow may come, but it melts very quickly. The thick fog is the worst feature of the British climate.

The formal name of the British national flag is Union Flag. It combines the St. George’s cross of England, St. Andrew’s cross of Ireland.

Great Britain is a highly developed industrial country. It exports machinery, vessels, motors and other goods. At the same time Great Britain imports some food products and raw materials from many countries of the world.

The United Kingdom is the constitutional monarchy. The monarch (a king or a queen) is the Head of State, but his power is limited by the Parliament.

The Parliament consists of two chambers known as the House of Commons and the House of Lords and the queen as its head. The British parliamentary system depends on political parties. The party which wins the majority of seats forms the Government and the leader usually becomes Prime Minister.

1. Where is Great Britain situated?

2. What parts does Great Britain consist of?

3. What is its population?

4. Are there many rivers in Great Britain?

5. What is the longest river in Great Britain?

6. What is the deepest river in Great Britain?

7. What is Great Britain as a political system?

8. What are the two Houses of the British Parliament?

9. Who is usually the head of the Government?

10. Great Britain is a highly developed country, isn`t it?

11. What does Great Britain export?

12. What does Great Britain import?

13. How is an association of former members of the British Empire and Britain called?

A: Do you know the full name of Great Britain?

B: Yes, I do. It is the United Kingdom of Great Britain and Northern Ireland.

A: What is the Queen`s name?

B: Her name is Elizabeth.

A: Why do tourists like to visit Great Britain?

B: It is a very beautiful country. They say that “England is green throughout”. Englishmen like their parks and gardens best of all.

A: Yes, I know that the art of gardening has a very old tradition in England. 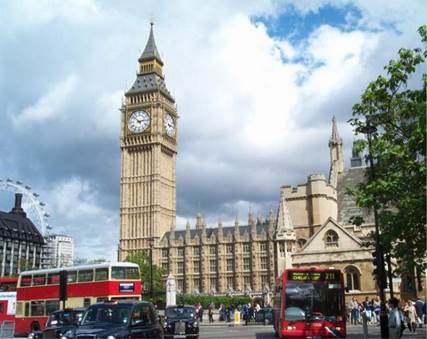 London is one of the biggest cities of the world. It is the capital of Great Britain. Its population is more than 11 million people. London is situated on the river Thames. It is divided into three main parts: the City, the West End and the East End.

London is where the invading Romans first crossed the River Thames. They built a city, surrounded it with a wall and called it Londinium. This original site of London is now called the City of London and is Britain’s main financial and business centre.

The saying “When a man is tired of London, he is tired of life” (Dr. Johnson) is a cliche, but you can’t be bored in London. There are hundreds of historic buildings, galleries and museums. There are parks and street markets, over 80 theatres and even more cinemas.

If you want to discover London, it is best to start with a tour on a sightseeing bus. It is also fun to go on a guided walk.

There are many places of interest in London: Buckingham Palace - the residence of the Queen, Trafalgar Square with a tall Nelson Column in it, Saint Paul`s Cathedral, the Highgate Cemetery where many famous people were buried and, of course, the British Museum.

Whitehall is the political centre. The Houses of Parliament - the seat of the British Government- are situated here. There one can see a famous Clock Tower- Big Ben, the symbol of London. Big Ben is really the bell which strikes the hour. Not far from the Houses of Parliament there is Westminster Abbey where many great Englishmen such as Darwin and Dickens are buried.

1. What is the capital of Great Britain?

2. Where is London situated?

3. London is one of the biggest cities of the world, isn`t it?

4. What is its population?

5. What are the three main parts of London?

6. What is the City of London?

7. What can one find in the West End?

8. Where do the poor of London live?

10. Where is the seat of the British Government?

12. What is the Queen`s residence?

13. What places of interest of London do you know?

A: Is it possible to see anything of London in one or two days?

B: It is very difficult, but the main sights you can see.

A: What do you think I ought to see first?

B: If you are interested in historical places you should go to Westminster Abbey, the Houses of Parliament, St. Paul`s Cathedral and the Tower. Do you like Art Galleries?

B: Then why not to go to the National Gallery?

B: Not very. But if you hurry take a taxi. In a few minutes you will be there.

A: Thank you very much.

B: You are welcome.