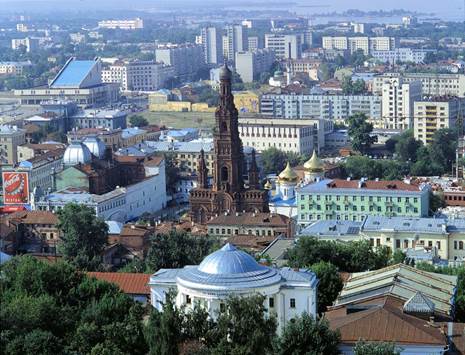 The Republic of Tatarstan is a subject of the Russian Federation. The Declaration of State Sovereignty of the Republic was signed on the 30th of August, 1990. The official languages are Tatar and Russian.

Tatarstan is one of the largest economic, scientific and political centres of the Volga Region. It is located at the center of the Russian Federation. It connects East and West, North and South of the country. Its area is more that 67 thousand square kilometers.

The geographical position of Tatarstan is favourable for the development of industry, agriculture, trade and other economic fields.

Tatarstan is a multinational republic. People of 115 nationalities live there in peace and harmony. The two main nationalities are the Tatars and the Russians. The important national values are tolerance, consensus and compromise.

Tatar cuisine is a result of the historical development of the nation and its geographical location. Long relationships between the local people and their neighbours, trade partners influenced the people’s taste. The Bulgars were good cattlemen, hunters, fishermen and farmers. This is the basis of the food traditions in modern Tatarstan.

Meat is widely used in Tatar national dishes: beef, lamb and horseflesh. The Tatars like the pastries of all kinds very much. One of their favourite ones is, perhaps, “ishpishmak”. And, no doubt, sweet pastries: “chuk-chuk”, “kosh tele”, “talkysh keleve” and much more. But the main thing about the Tatar cuisine is not only that it’s varied and very delicious. It is more than only food. It’s a meal that unites family and friends.

1. When was the Declaration of State Sovereignty of the Republic of Tatarstan signed?

2. What can you say about the population of the Republic of Tatarstan?

3. How many cities, towns and settlements are there in Tatarstan?

4. Where is the Republic of Tatarstan located?

5. The geographical position of Tatarstan is favourable, isn’t it?

6. Is Tatarstan a multinational republic?

7. What are the official languages of the Republic of Tatarstan?

8. Tatar cuisine is a result of the historical development of the nation and its geographical location, isn`t it?

9. What is the basis of the food traditions in modern Tatarstan?

10. What is widely used in Tatar national dishes?

11. What are favourite dishes of the tatars?

12. The Tatar cuisine is more than only food, isn`t it?

Dialogue: At the Restaurant

Hostess:Hi! Welcome to Paradise. Do you have a reservation?

Waiter: Welcome to Paradise. Here are your menus. Are you ready to order?

Smirnov: Not yet, give me a second, please. I’ll have the grilled salmon.

Smirnov: Yes, I`ll have juice. What kind of juice do you have?

Waiter:Here you are. Enjoy your meal.

(After a time). How was everything?

Smirnov: No, thank you.

Waiter: Can I get you anything else?

Smirnov: No, just the bill please. Thanks a lot. 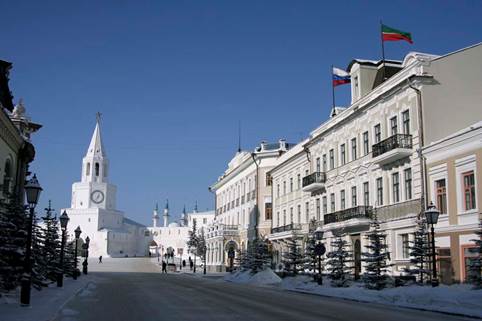 Kazan is one of the oldest and most beautiful cities in the Volga region. It is a thousand-year-old city with rich and unique history. In 2005 the people of Tatarstan, Russia and whole world celebrated its millennium anniversary.

Kazan is located in a very picturesque place. Two rivers – the Volga river and the Kazanka river, which played an important role in the history of the peoples of the country – meet here. The population of Kazan is over 1.3 mln. people.

Thick forests with lots of animals, vast fields, big and small rivers and deep lakes with lots of fish make the nature of the Kazan area beautiful.

The Kazan Kremlin remains to this day the very heart of the capital of Tatarstan. The most unusual structure in the Kremlin complex is the Suyumbike Tower. It has become the architectural symbol of Kazan.

Nowadays the Kazan Kremlin symbolizes the nation’s history, its culture and traditions. In the course of many years Russians and Tatar cultures developed side by side. This can be easily seen in the Kazan Kremlin. Magnificent golden crosses of the Annunciation Cathedral harmonize with ornate minarets of Kul-Sharif Mosque.

In 2000 the Kazan Kremlin became a monument of UNESCO Word Heritage.

The cultural life in Kazan is diverse and many-sided. There are many theatres and museums in Kazan. The Opera and Ballet theatre named after M. Djalil is the largest and the most beautiful оf them. Nowadays the National Museum of Tatarstan is a historical and cultural complex. The State Museum of Fine Arts is one of the leading museums in Russia.

Kazan is one of the most important economic centres of the Russian Federation. Large enterprises produce planes, helicopters, compressors, computer systems, optic, chemicals, clothes, consumer goods and so on. It is one of the largest river ports on the Volga.

Kazan is open to guests from all over the world.

1. What is the capital of Tatarstan?

2. Where is Kazan situated?

3. When was Kazan founded?

4. What is the population of Kazan?

5. Are there many parks and gardens in Kazan?

6. There are many monuments to famous people in Kazan, aren`t there?

7. What does the Kazan Kremlin symbolize?

8. What is the most unusual structure in the Kremlin complex?

9. Is Kazan a big educational centre?

11. Are there many industrial enterprises in Kazan?

Dialogue: At the airport

D.: Did you have a good flight?

M.: Yes, on the whole it was quite fine.

D.: The program of your stay in our city is quite intensive. We’ve a lot of sights to visit.

M.: Yes, I would like to see as many places of interest as possible. I have never had a chance to visit your city.

D.: Then maybe you’d like to have a sightseeing tour about the city right after lunch?

D.: We will visit it. I’m sure you won’t be disappointed. Here is our car.