The new Constitution of Russia was adopted by national referendum on 12 December 1993, following the 1993 Russian constitutional crisis. 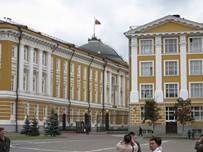 According to the Constitution Russia is a federation and formally a semi-presidential republic, wherein the President is the head of the state and the Prime Minister is the head of the government. The Russian Federation is fundamentally structured as a representative democracy. Executive power is exercised by the government. Legislative power is vested in the two chambers of the Federal Assembly.

The federal government is composed of three branches: legislative, executive and judiciary.

Executive branch is the President. The president is the commander-in-chief of the military, can veto legislative bills before they become law, and appoints the Cabinet and other officers, who administer and enforce federal laws and policies.

The president is elected by popular vote for a four – year term. Ministries of the government are composed of the premier and his deputies, ministers, and selected other individuals; all are appointed by the president on the recommendation of the Prime Minister (whereas the appointment of the latter requires the consent of the State Duma).

Leading political parties in Russia include United Russia, the Communist Party, the Liberal Democratic Party of Russia. and Fair Russia.