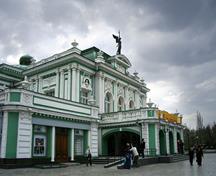 The centrepiece of the city is an ensemble of buildings along Lyubinsky prospekt (Lenin Street). This is the former Gostiny Dvor, flanked by two chapels. Close at hand are a bourse and a Drama theatre. Both buildings are dated from late 1800s – early 1900s. Side streets are lined with stately mansions of former insurance companies, trusts and banks from the same period. Hidden closer to the river confluence are the few survi-ving somber buil-dings of the 18th-century fortress. The largest and most opulent church in the city is the Dormition Cathedral, a five-domed edifice in the Russian Revival style. It was consecrated in 1896 but blown up by the Soviets. Fortunately, it was meticulously restored in the early 2000s.

Another area of interest is Nikolsky prospekt (Krasnykh Zor Street), where a line of merchants' wooden houses still stands. The street leads to the Neoclassical cathedral of St. Nicholas. It was commissioned by the Cossacks. It was designed by Vasily Stasov and consecrated in 1840. It contains various relics of the Siberian Cossacks. Various other landmarks are scattered throughout the city. 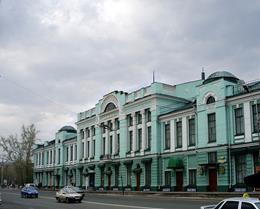 The major museums in Omsk are the Omsk Vrubel Art Gallery and the State Historical Museum, located in the former bourse building and the governor-general's mansion, respectively.

Among the attractions of city - more than several dozen churches, monuments, including the style of "l’art nouveau", historic sites, and sculptures devoted to famous people, and lots of other interesting places.

One more thing that could easily be referred both to architecture and transportation is a subway system. It was proposed in the late 1980s, but postponed for lack of funds. Currently it is under construction, with the Metro bridge over the Irtysh river. The bridge is already opened for cars (upper level), but the metro (lower level) is still under construction. As a first step one short line will connect the districts in the northwest with the city centre. The first line of the metro is scheduled to be finished in 2010 and generally our subway system is going to be the cutting edge.