It is a member of the Common Market. Before the Second World War the country was an old naval powerful state. After the war Great Britain has lost almost all its colonies, some of them feel under the influence of the USA, others obtained independence.

During the last decades there has been a great change in the structure of British industry. The main British exports were coal and textiles. But now British export of machinery, vehicles and electrical goods has greatly increased. Many new branches of industry have developed: such as the production of motor cars, radio and television sets and others.

There is no variety mineral resources in the country, but coal deposits take the 6th place in the world. Coal-mining is one of the oldest industries together with ship-building and cotton industries. In the centre of England there is a district called the

Black country. From here coal and iron are brought to many industrial cities.

Recently deposits of oil and natural-gas have been found in the British sector of the North Sea. Production of oil from offshore wells in the North Sea began in 1975, and the country is self-sufficient in petroleum. Other mineral resources include iron ore, tin, limestone, salt, china clay, oil shale, gypsum, and lead.

Sheffield is the centre of steel industry. Everything one needs in life is manufactured in Birmingham. Manchester is a textile centre. Liverpool is an important part as well as London. Clydeside and Belfast are famous for their ship-building.

Today the development of British industry is destroyed by the extreme expansion of the military sector in it. One-third of the budget has been devoted to arms expenditure. Military industry receives more state funds.

Four-fifth (4/5) of the land is devoted to agriculture. It provides employment for more than 1 million people. The main branch of British agriculture is dairy-farming. Milk and milk products are famous all over the world. The main grain crops are wheat and barley. But a number of agricultural products is still imported.

London, the capital of Great Britain, and the largest city in Europe, is situated on the river Thames. It is the main political, commercial, transport centre of the country and one of the biggest ports in the world.

London covers the territory of 400 square miles. It’s population is about 9 million people. London is a very old city. It is more than 20 centuries old. The old Celts gave London its name. The Romans made the city the centre of their colony, the Germanic invaders tried to destroy it and the Normans made London the capital of the country. Llyn-din was the original name of the settlement which means a «lonely port».

Modern London is not one city. It is a number of cities, towns and villages that have grown together to make one vast urban area. «Great London» consists of many parts but the main traditional parts are: the City, the West End and the East End. 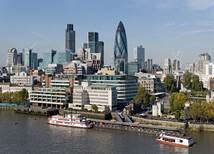 The City is an oldest and very important part of the capital, it’s commercial and business centre. Many banks, governmental and newspaper offices are situated in the City. People do not live in the City, they only work there. The heart of the City are 3 buildings: the Manshion House, the Royal Exchange and the Bank of England. Every block in the City is famous for it’s historical associations. St. Paul’s Cathedral, the finest Renaissance church in Europe, and the Tower of London, an ancient castle, are the most famous places of interest in the City.

The West End is a symbol of wealth, the richest, fashionable and most beautiful part of London. It is situated between the City and Hyde Park. Here you can see wide streets, fine theatres, cinemas and concert halls, the best hotels and restaurants. Among all historical places of the West End the most interesting are: Westminster Abbey and Westminster Palace, known as the Houses of Parliament, with 2 towers: the Victoria Tower and the Clock Tower with Big Ben.

The main industries of London are shipbuilding, textile and machine-building industries.

Many famous people lived in London: Heinrich Heine, the German poet; Mozart, the German composer; Alexander Herzen, the Russian writer; Ivan Pavlov, the famous Russian physiologist and many other scientists, artists, writers, painters. Karl Marx worked and lived for many years in London and is buried in the Highgate Ceremony.