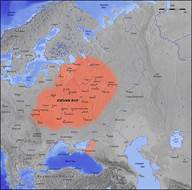 The nation's history began with that of the East Slavs. They emerged as a recognizable group in Europe between the 3rd and 8th centuries AD (Anno Domini). The first East Slavic state was Kievan Rus'. It arose in the 9th century and was founded and ruled by a noble Viking warrior class and their descendant. Kievan Rus' adopted Christianity from the Byzantine Empire in 988. It was the synthesis of Byzantine and Slavic cultures and that defined Russian culture for the next millennium. Kievan Rus' ultimately disintegrated and the lands were divided into many small feudal states. The most powerful successor state to Kievan Rus' was Moscow (or Grand Duchy of Moscow). Moscow served as the main force in the Russian reunification process and independence struggle against the Golden Horde.

Moscow gradually reunified the surrounding Russian principalities and came to dominate the cultural and political legacy of Kievan Rus'. By the 18th century, the nation had greatly expanded through conquest, annexation and exploration to become the Russian Empire. And it was the third largest empire in history, stretching from Poland eastward to the Pacific Ocean and Alaska.

Peter the Great officially proclaimed the existence of the Russian Empire in 1721. Under the Romanov dynasty and Peter I (Peter the Great), the Russian Empire became a world power. Ruling from 1682 to 1725, Peter defeated Sweden in the Great Northern War. He forced it to cede West Karelia and Ingria – the two regions lost by Russia in the Time of Troubles, Estland, and Livland. That secured Russia's access to the sea and sea trade. It was in Ingria that Peter founded a new capital, Saint Petersburg.

Catherine II (Catherine the Great) ruled from 1762 to 1796 and continued the efforts to establish Russia as one of the Great Powers of Europe.

In alliance with Prussia and Austria, Russia stood against Napoleon's France in the reign of Alexander I (1777–1825)(Alexander the Blessed).

The prevalence of serfdom and the conservative policies of Nicolas I (1796–1855) impeded the development of Russia in the mid-nineteenth century.

Nicholas's successor Alexander II (reign: 1855–1881) enacted significant reforms, including the abolition of serfdom in 1861. These "Great Reforms" spurred industrialization. However, many socio-economic conflicts were aggravated during Alexander III’s reign and under his son, Nicholas II. Those conflicts as well as World War I brought the Russian monarchy to its downfall.