The United Kingdom of Great Britain and Northern Ireland is situated on 2 large islands and 5.000 smaller ones. These are the British Isles. Great Britain is the largest island in Europe. It is separated from Ireland by the Irish Sea, from the European Continent – by the North Sea, the English Channel and the Strait of Dover. In the east the country is washed by the North Sea. On the west coasts Great Britain is bound by the Atlantic Ocean. 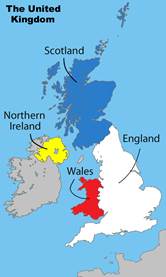 Wales is а peninsula in the south-west of the island of Great Britain. It occupies about 9 % of its territory with the population of 4.8 % of the total population. The Welsh speak their own language. The capital is Cardiff.

Northern Ireland occupies the north-east part of the island of Ireland. Its territory amounts to 5.2 % of the total territory of Great Britain. Its capital is Belfast.

The southern part of Ireland is an independent republic.

The greater part of the surface of England and Ireland is flat. The northern part of Scotland and Wales is mountainous and rocky. The main rivers are short but can be used by ships. The longest of them are the Severn, 353 kms in length and the Thames, 332 kms in length. There is a number of lakes in the country. The largest lake is the Lake District. The coastline of the country has excellent harbours.

As a rule, climate depends on the geographical position of the country. The British Isles are washed by the warm current of the Gulf Stream, It makes the climate more moderate than on the Continent and brings a little of tropics to the very doors of English people. So the weather is mild, wet, cloudy, windy and changeable.

The total area of the country is about 21.600 square miles or 245.000 kms. The population of Great Britain is about 58 million, 44 being Englishmen. Over 80 % of the population live in cities and towns. Nearly all people speak English. but some speak Celtic languages.