THE SYNDROME OF HEART FAILURE

Cardiac Failure and Its Reasons. In cardiac failure or de­compensation the heart, for one or more reasons, the blood is not circulating at a satisfactory rate. Blood arrives at the right atrium from the superior and inferior venaecavae, having made its circuit through the body. The heart moves this venous blood into the right ventricle, through the lungs for gas exchange, and via the left atrium and ventricle into the aorta. In health, the heart accomplishes this without faltering. Thus it does not allow an abnormal amount of blood to accumulate in the veins of the body, in any cham­bers of the heart, or in the lungs. The rate of flow in health is sufficient to provide normal pressure in the systemic arteries and veins and in the vascular bed of the lungs, v The diseased heart may have such a handicap as to be unable to move the blood satisfactorily. If this deficit is moderate, it may occur only during physical exertion, for example, in climbing stairs or running. Under these circum­stances, the muscles of the legs need a faster-moving blood stream because of their greater work. The heart is called upon to speed up the flow. If, by reason of a mechanical handicap such as a leaking or constricted valve, the heart cannot increase its output to meet the demands of the mus­cles, then the body will suffer from the inadequacy. The same is true when the heart is weak because of a diseased condition of its fibers. The following changes may take place during the period of "failure" of the heart to do its job pro­perly. 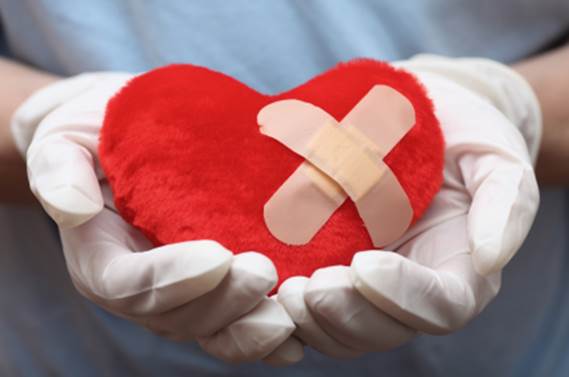 1) The capillaries and all veins, minute and large, will contain more than a normal amount of blood.

2) The hydrostatic pressure will be greater than normal in these areas.

3) The blood in these areas will have a greater amount of carbon dioxide and waste products of the muscles.

4) The blood will have less oxygen combined with hemo­globin because the need of the active muscles has withdrawn more oxygen than in a restful state.

6) Cyanosis may be seen in the lips, mucous membranes, nail beds, and some areas of the skin. The cause is insuffi­cient oxygen saturation of the hemoglobin.

7) Dyspnea may occur. The causes are excess of carbon dioxide in the arterial blood and reflexes from the lungs whose vessels are engorged and full of blood.

Edema may be present, involving not only the lung tissue but also the ankles, the legs, liver, and sometimes all areas below the heart. Fluid may exude into the air sacs of the lungs, where it may be heard with the stethoscope, or later, in severe cases such as gargling, by the unaided ear. Water is caused to leave the capillaries and accumulate in the tissues.

Cardiac Compensation. We speakof the heart as being com­pensated when it is able to meet its responsibility quite well. By hypertrophy (increase in muscle mass) and dilatation, both causing enlargement, it compensates for its defect (a stenosed or regurgitating valve) or for the extra load imposed by high blood pressure in the arteries.

If, for example, the normal output of the heart of an in­dividual at rest is 60 ml, and a leaky valve allows 20 ml to flow backward into the preceding chamber through which it had just passed, the chamber may enlarge to hold 80 ml or more. If it then ejects this new amount, and 20 ml return through the faulty valve, the effective propulsion is in the original normal amount, 60 ml. The chamber has compensated for the defective valve. The compensated heart, with a nor­mal rhythm (regular pulse) and satisfactory rate, needs no specific medication.

Cardiac Decompensation. There is, however,a physiolo­gical limit to which a heart is able to compensate for the burden placed upon it by certain disease states. If the bur­den upon the myocardium is too great or lasts too long, the muscle may become so fatigued that it cannot accomplish what it did earlier. It cannot produce the vigorous contrac­tions to expel, with each beat, all or nearly all the blood that it contains. Then some blood is always present within the chambers, contributing to the enlargement. The move­ment of blood from the veins through the lungs and heart and into the arteries and capillaries is slowed down, and "failure", or decompensation, is then present. Cardiac failure may be present when the heart is functioning at 90 per cent efficiency or any fraction of the normal 100 per cent effecti­veness.

Drugs Used in Cardiac Decompensation. A drug extracted from a plant of the digitalis group is indicated in almost all cases of heart failure.

If correctly used, a drug of this group will usually restore so much functioning strength to the weakened heart muscle that a patient who has been a semiinvalid or moribund in acute failure may live many years with quite adequate heart action.