SOME FEATURES OF A DIGITAL COMPUTER

It should be noticed that even in a large-scale digital system, such as in a computer, or in a data-processing, control or digi­tal-communication system, there are only a few basic operations which must be performed. These operations may be operated many times. The four circuits most commonly employed in such systems are known as the OR, AND, NOT and FLIP-FLOP.They are called logic gates or circuits.


problems of numerical computations of such complexity and with such speed that solution by human calculation is not fea­sible. So the computer as a system can perform numerical com­putations and follow instructions with extreme speed but it can­not program itself.

\\fe know that the numbers and the instructions which form the program, the computer is to follow, are stored in an essen­tial part of the computer called the memory. The second im­portant unit of the computer is the control whose function is to interpret orders. The control must convert the command into an appropriate set of voltages to operate switches and carry out the instructions conveyed by the order. The third basic element of a computer is the arithmetic device, which contains the cir­cuits performing the arithmetic computations: addition, subtrac­tion, etc. The control and arithmetic components are called the central processor. Finally a computer requires appropriate in­put-output devices for inserting numbers and orders into the memory and for reading the final result.

Suppose a command to perform an addition or division has been transmitted to the central processor. In response to this order the control must select the correct operands from the memory, transmit them to the arithmetic unit and return to the 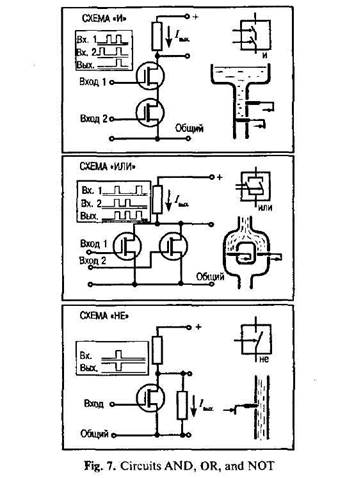 memory the result of the computation. The memory serves for storing not only the original input data, but also the partial re­sults which will have to be used again as the computation pro­ceeds.

Lastly, if the computation doesn't stop with the execution of this instruction and the storage of the partial result, the control unit must automatically pass on to the next instruction. The connection of the control unit back to the input permits inser­tion of more data when there is room in the memory.