Read the text and check your answers. How much did you guess correctly?

The Iron Bridge, spanning the River Severn near Coalbrookdale in Great Britain, is the first cast iron structure (fig. 8.1a), built in 1779 with semicircular arch spans. Each span was 30.6 m long, and has five haunch ribs.Abraham Darby designed the Iron Bridge after French engineers had cast a similar bridge a few years earlier, but they never completed their structure. Though the pedestrian Iron Bridge isa British national monument, it is still used. 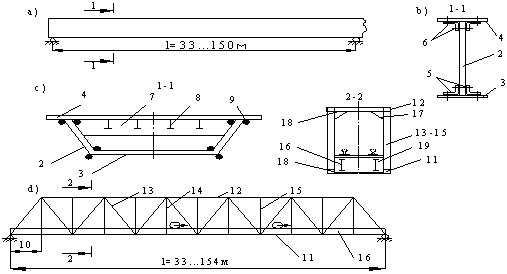 In the 19th century, bridge builders used wrought iron and later high-strength steel. It is stronger and superior to iron in both tension and compression. Due to its rigidity and durability, steel is simply the best building material. It allows easy metalworking compared to other building materials.

Low alloy steel offers superior quality owing to the fact that it contains small amount of elements like nickel, chromium, manganese, etc. Currently stainless steel grades are widely used in both space and building industries. Such steel does not need any surface protection because of the chromium oxide film on its surface.

Frame span length is up to 100 m. Bridge engineers employ trusses for spans of 200 m, and for arch spans of 300 m in length.

The disadvantages of metal bridges include considerable steel consumption, corrodibility, high dynamic sensitivity, and high maintenance costs (due to the need of painting).

Welding (fig. 8.3a), rivets (fig. 8.3b) or bolts (fig. 8.4c) are effective for joining metal elements used in construction. Welding is the largest costs saving method but it is not as reliable as riveting or bolting. Rivets are not widely used because use of them is rather complicated, whereas bolts are commonly used.

Numerous bridges and one barrier span the River Thames in London. The London Bridge is the oldest in Great Britain and dates back to the time when the Romans invaded Britain and built the first bridge at the place of the wooden Celtic structure by AD 60. The Danes destroyed it in 805 but its replacement also crashed in 1091. Londoners rebuilt the bridge, but it burned down in 1136.

By 1209, a self-taught builder who proposed an arch bridge out of stone (fig. 9.1a) rebuilt the Old London Bridge once again. It was the first European masonry bridge. Its total length was of about 300 m with the spans of 20 m high above the water. The bridge consisted of 19 pointed arches, built on piers; a 20th opening was a wooden drawbridge. The stone pier foundations were inside cofferdams with timber piles driven into the riverbed. The cutwaters, surrounded by loose stone fillings, protected the bridge piers. As a result, the bridge looked as if it were a dam because the reduced waterway was a quarter of its original width. It caused essential water level differences, and boat sailing was very dangerous and became one of the thrills of Londoners.

The Old London Bridge resulted into an overcrowded village with its chapel and passageways between the multistory houses, built above the shops lining both sides of the road between the fortified gates at either end of the bridge. The heads of traitors were stuck on the gate spikes until the 17th century. From time to time, the bridge suffered from fires, though buildings and the bridge itself were made of stone. In 1282, five arches of the Old London Bridge collapsed under the pressure of winter ice.

Figure 9.1 History of the London Bridge

By 1762, Londoners removed the houses to widen the carriageway. Two central arches became one large arch, but it turned into a serious erosion problem for the riverbed. To protect the remaining piers they had constantly to pour gravel. In 1831a new granite structure with five semi elliptical stone arches was built several yards upstream by Sir John Rennie, but in 1971 its stone facing was dismantled and shipped stone-by-stone to the USA where Rennie’s bridge was re-erected in Arizona (fig. 9.1b). Prestressed concrete beams by Harold Knox King replaced Rennie’s stone arches in 1972. The modern London Bridge reaches 104 m in overall span length (fig. 9.1c).