Have you ever been to St Petersburg? If so, try to complement the text with your own information. If not, try to enhance your professional range of knowledge

Tsar Peter the Great wanted to develop his marine and merchant fleets, so he restricted bridging his young town. Nevertheless, there were some timber and floating bridges because the Neva River, being between 350 and 650 m wide, flew 13 km within the city limits, and the city itself sprawled out over the numerous islets of the Neva River Delta. As the city was badly in need of bridges, the first floating bridge appeared in 1727. Like other earlier temporary bridges, it was made of rows of anchored barges tied together, which obstructed free shipping. Strong winds blew in from the sea, rose the water level in the river and crashed the barges or pass them away.

A flourishing age of Russian bridge engineering began in 1762 with the establishment of the Bridge and Road Department. More than three hundred bridges appeared across the rivers and canals including timber, masonry, floating and cast iron structures. St Petersburg earned the reputation of one of the most beautiful cities in the world. The Hermitage Bridge, the Winter Bridge and the Prachechny Bridge were reputed to be among the world’s finest structures. At present, there are 400 bridges in the city, and together with those in the suburbs, the figure is almost 800. Each bridge has its own individual appearance, but taken together they give the impression of one harmonious entity. Some, like the Liteiny Bridge is famous for their wrought-iron bridge railings; others are world-famous for their sculptural groups. The most attractive bridges are in the parks of Tsarskoye Selo (fig. 5.2d), across the Fountanka River and the Griboedov Canal (fig 5.2c).

Some of the bridges over the canals are so narrow that only two persons can walk abreast. The medieval-looking three-span bridges with massive stone towers appeared in the 18th century. Presently towers decorate only the Lomonosov and the Old-Kalinkin Bridges. Modern city planners have to rebuild and broaden the rest of them. Some suspension bridges, built between 1820 and 1840, including the graceful Lion (L’vinyi) Bridge, Pochtamptsky Bridge and Bankovsky Bridge, have survived. The latter is a footbridge adorned with gilt winged lions – griffins. The supporting chains come out of the animals’ jaws making the bridge unique (fig 5.2c). 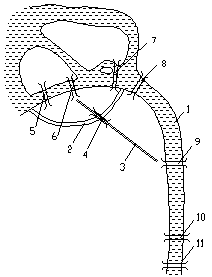 The state takes under its protection about thirty St Petersburg bridges.The Anichkov Bridge across the Fontanka River (fig. 5.1; 5.2a), being part of our national heritage, is one of them. In 1715, the Admiralty engineer battalion under the command of M. Anichkov built a wooden three-span drawbridge about six metres wide on a pile foundation. In 1841, the old structure turned into an arch masonry bridge, as wide as Nevsky Avenue with four towers at the corners decorated with sculptures by Pyotr Klodt. The sculptural group represents a youngster thrown to the ground, then rising on his knee while trying to tame a reared up horse. At last, the animal comes under control, as the youngster becomes steady on his legs, and finally the horse obeys the youngster’s will.

Not very far away from the Anichkov Bridge, there is the Egyptian Bridge decorated with four sphinxes. The original suspension bridge had three rows of heavy chains, hanging on two cast-iron gates. Both horse-drawn carriages and pedestrians (fig.5.3a) moved on the structure. Decorated in Egyptian style, the bridge featured hexagonal lanterns, gilded hieroglyphics and ornaments. The bridge approaches, decorated by pink granite with cast-iron sphinxes topped on bridge abutments, made the structure the part of St Petersburg visual environment.

In the winter of 1905 the bridge, which was 80 years old, collapsed. A cavalry squadron crossing the Fontanka River and eleven sleighs moving in the opposite direction fell down into the icy river because metal bridge elements lost their strength under frost. The destructive condition, called metal cold brittleness, caused the disaster (fig. 5.3b). Fifty years later, in 1955, the single span bridge was rebuilt and redecorated. The survived sphinxes lay down to their rightful places (fig. 5.3c). Currently the Egyptian Bridge carries Lermontov Avenue with traffic lanes and banquettes (fig. 5.3d).

The number of bridges in St Petersburg is still growing because of its position at the mouth of the Neva River with its two arms. Engineer S. Kerbedz and architect K. Brulov spanned one of arms in 1850 by remarkable engineering work. It was the Blagoveshchensky (Annunciation Day) Bridge. In 1918 the bridge was named after Lieutenant Schmidt, (fig. 5.1; 5.2e), a hero of the 1905 revolution, but now it bears its original name. This is the oldest permanent bridge and the last one before the Neva flows into the Gulf of Finland. At the beginning of the 20th century, it appeared to be too narrow for traffic and impassable for navigation. Professor G. Peredery designed a wide seven-span structure in 1938. Now the total bridge span is 331 m, and its modern movable span gives access to ocean vessels of 50-60 m in height. It was the first time that engineers had pioneered electric welding instead of riveting for such heavy metal structures.

Engineer A. Struve and architect Ts. Cavos designed the Liteiny Bridge. Constructed in 1879, it was the first bridge illuminated by electrical lights along its total length of 408 m (fig. 5.1). The old structure could not respond to modern traffic demands, and its steel arches corroded. The reconstruction of 1967 preserved its original form because steel girders remained on the reconstructed piers. Its bascule leaf holds the world record for its length and weight of 3,225 tons. Powerful hydraulic devices can lift it within two minutes. The bridge features highly artistic wrought iron railings adorned with Russian State Emblems.

The celebration of the 100th Anniversary of St Petersburg’s foundation followed by the international competition for the best bridge design. The idea of a cantilever arch structure, put forward by French engineers, prevailed, and the Trinity Bridge was built nearby the Summer Garden in 1903 (fig. 5.1; 5.2f). The Neva River is very wide at this place so that the bridge with its flat metal arches is 582 m long, and its bascule span allows free shipping.

The next competition was announced for the Palace Bridge construction close to St Basil Spit (fig. 5.1; 5.2g). The expert commission adopted a five-span structure with sculptural decoration in classical style, but the First World War cancelled that plan, and the bridge designed by A. Pshenitsky in strict monumental style appeared in 1916. Its total length is 250 m, and the 57 m steel bascule span, directed towards the pale sky during the “white nights”, looks very romantic.

It was no easy task to connect the soft riverbanks of the Neva River. However, innovative building technology provided suitable solutions. Professor G. Peredery and architect A. Nickolsky designed the Volodarsky Bridge (fig. 5.1) which was open to traffic in 1936. The bascule, double-leaf middle span is made of metal. Its steel tubes filled with concrete served as arch reinforcement and could resist large compression forces. The reinforced elements look as if they were entirely made of metal, and the concrete river piers are faced with granite. There are bascule span mechanisms inside the piers. The length of each of the two river spans, supported by flat arches, is 101 m. The arches have no wind bracing and the piers do not have cutwaters.

The total length of St Petersburg’s bridges is nearly sixteen kilometers, and the Alexander Nevsky Bridge is one of the longest and widest amongst them. Its overall length is more than 900 m including approach ramps, and the width is 35 m. The bridge was open in 1965. It represents a typical engineering structure from the second half of the last century, looking strict and in harmony with its surroundings (fig. 5.1). However, the record holder among the bridges across the Neva River is the Big Obukhovsky Bridge that is 2,824 m long (fig. 5.1; 5.2h).

The Big Okhta Bridge is of a through type. Designed by engineer G. Krivoshein, it started its service life in 1911 (fig. 5.1). The total bridge span is 355 m. N. Belelyubsky and G. Krivoshein designed the Finlyandsky Railway Bridge. That through bridge was open nearly a century ago, in 1911.