One of the first historically recorded examples of automatic control system is the system which regulated soil humidity using automatic regulation of irrigative channels in the ancient Babylon (more than 4,000 years ago).

The use of feedback to control a system has a fascinating history.

The first feedback system to be invented in modern Europe was the temperature regulator of Cornelis Drebbel (1572–1633) of Holland [1]. Dennis Papin [1647–1712] invented the first pressure regulator for steam boilers in 1681. Papin’s pressure regulator was a form of safety regulator similar to a pressure-cooker valve.

The first automatic feedback controller used in an industrial process is generally agreed to be James Watt’s flyball governor, developed in 1769 for controlling the speed of a steam engine. The all-mechanical device measured the speed of the output shaft and utilized the movement of the flyball with speed to control the valve and therefore the amount of steam entering the engine. As the speed increases, the ball weights rise and move away from the shaft axis, thus closing the valve. The flyweights require power from the engine to turn and therefore cause the speed measurement to be less accurate.

The first historical feedback system, claimed by Russia, is the water-level float regulator said to have been invented by I. Polzunov in 1765. The float detects the water level and controls the valve that covers the water inlet in the boiler.

1800 Eli Whitney’s concept of interchangeable parts manufacturing demonstrated in the production of muskets.Whitney’s development is often considered to be the beginning of mass production.

1868 J. C. Maxwell formulates a mathematical model for a governor control of a steam engine.

1932 H. Nyquist develops a method for analyzing the stability of systems.

1998–2003 Advances in micro- and nanotechnology. First intelligent micromachines are

developed and functioning nanomachines are created.

We must also indicate the contribution of prominent Russian and Soviet scientists to Automatic control theory: Vyshnegradskiy, Mikhailov, Pontryagin, Andronov and others.

Fundamental to any control system is the ability to measure the output of the system, and to take corrective action if its value deviates from some desired value. This in turn necessitates a sensing device. Man has a number of 'in-built' senses which from the beginning of time he has used to control his own actions, the actions of others, and more recently, the actions of machines. In driving a vehicle for example, the most important sense is sight, but hearing and smell can also contribute to the driver's actions.

The first major step in machine design, which in turn heralded the industrial revolution, was the development of the steam engine. A problem that faced engineers at the time was how to control the speed of rotation of the engine without human intervention. Of the various methods attempted, the most successful was the use of a conical pendulum, whose angle of inclination was a function (but not a linear function) of the angular velocity of the shaft. This principle was employed by James Watt in 1769 in his design of a flyball, or centrifugal speed governor. Thus possibly the first system for the automatic control of a machine was born. 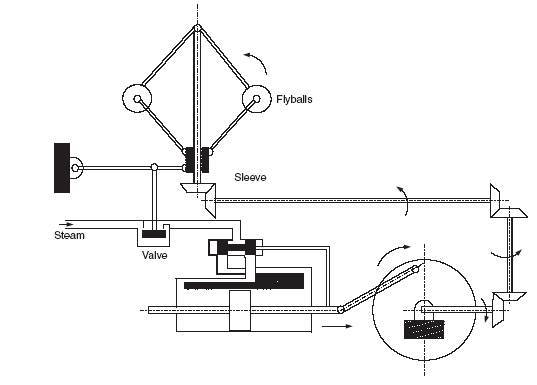 The principle of operation of the Watt governor is shown in Figure 1., where change in shaft speed will result in a different conical angle of the fly balls. This in turn results in linear motion of the sleeve which adjusts the steam mass flow-rate to the engine by means of a valve.

Watt was a practical engineer and did not have much time for theoretical analysis. He did, however, observe that under certain conditions the engine appeared to hunt, where the speed output oscillated about its desired value.

The elimination of hunting, or as it is more commonly known, instability, is an important feature in the design of all control systems.

In his paper 'On Governors', Maxwell (1868) developed the differential equations for a governor, linearized about an equilibrium point, and demonstrated that stabil­ity of the system depended upon the roots of a characteristic equation having negative real parts. The problem of identifying stability criteria for linear systems was studied by Hurwitz (1875) and Routh (1905). This was extended to consider the stability of nonlinear systems by a Russian mathematician Lyapunov (1893). The essential mathematical framework for theoretical analysis was developed by Laplace (1749-1827) and Fourier (1758-1830).

Work on feedback amplifier design at Bell Telephone Laboratories in the 1930s was based on the concept of frequency response and backed by the mathematics of complex variables. This was discussed by Nyquist (1932) in his paper 'Regeneration Theory', which described how to determine system stability using frequency domain methods. This was extended by Bode (1945) and Nichols during the next 15 years to give birth to what is still one of the most commonly used control system design methodologies.

Another important approach to control system design was developed by Evans (1948). Based on the work of Maxwell and Routh, Evans, in his Root Locus method, designed rules and techniques that allowed the roots of the characteristic equation to be displayed in a graphical manner.

The advent of digital computers in the 1950s gave rise to the state-space formula­tion of differential equations, which, using vector matrix notation, lends itself readily to machine computation. The idea of optimum design was first mooted by Wiener (1949). The method of dynamic programming was developed by Bellman (1957), at about the same time as the maximum principle was discussed by Pontryagin (1962). At the first conference of the International Federation of Automatic Control (IFAC), Kalman (1960) introduced the dual concept of controllability and observ­ability. At the same time Kalman demonstrated that when the system dynamic equations are linear and the performance criterion is quadratic (LQ control), then the mathematical problem has an explicit solution which provides an optimal control law. Also Kalman and Bucy (1961) developed the idea of an optimal filter (Kalman filter) which, when combined with an optimal controller, produced linear-quadratic-Gaussian (LQG) control.

The 1980s saw great advances in control theory for the robust design of systems with uncertainties in their dynamic characteristics. The work of Athans (1971), Safanov (1980), Chiang (1988), Grimble (1988) and others demonstrated how uncer­tainty can be modelled and the concept of the H

The 1990s has introduced to the control community the concept of intelligent control systems. An intelligent machine according to Rzevski (1995) is one that is able to achieve a goal or sustained behaviour under conditions of uncertainty. Intelligent control theory owes much of its roots to ideas laid down in the field of Artificial Intelligence (AI). Artificial Neural Networks (ANNs) are composed of many simple computing elements operating in parallel in an attempt to emulate their biological counterparts. The theory is based on work undertaken by Hebb (1949), Rosenblatt (1961), Kohonen (1987), Widrow-Hoff (1960) and others. The concept of fuzzy logic was introduced by Zadeh (1965). This new logic was developed to allow computers to model human vagueness. Fuzzy logic controllers, whilst lacking the formal rigorous design methodology of other techniques, offer robust control with­out the need to model the dynamic behaviour of the system. Workers in the field include Mamdani (1976), Sugeno (1985) Sutton (1991) and Tong (1978).

So, automatic control is a hidden technology:

When it works well nobody notices!

And when it doesn’t - the results can be catastrophic.

Saab aircraft crash (and many other ones in CIS countries): pilot/control system interaction; 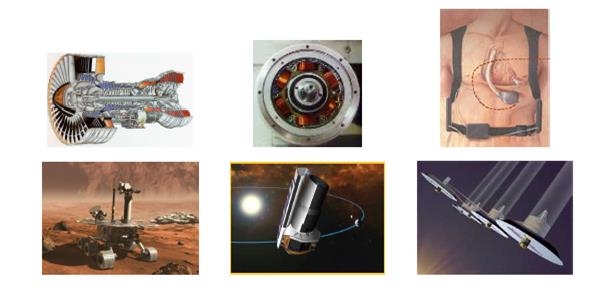 If we consider modern tendencies in the development of control systems we may clearly see the general trend towards intelligent systems. 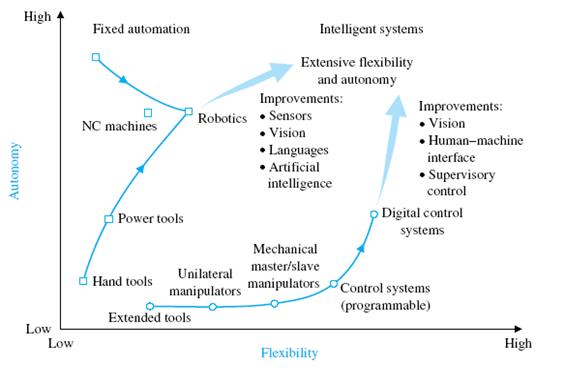