Read the text to have a basic notion of bridges in the capital of Russia.

Moscow, first mentioned in the chronicles in 1147, was a fortress on a high hill with the Kremlin, surrounded by thick walls of pinewood. The Neglinnaya and the Moskva rivers protected the Kremlin from hostile forces on both sides. People excavated a wide and deep ditch on the third side to provide a defense from all sides (fig. 4.1), and the early bridges of Moscow spanned that ditch.

The oldest bridge over the Neglinnaya River at the Kremlin’s Trinity Gate dates back to 1367. It has survived but stands on a dry place because the river ran fully enclosed in an underground conduit. The Moscovites replaced timber drawbridges, built at the Saviour Tower and St Nicholas Tower, by masonry structures and in the early 19th century dismantled them after filling the ditch with earth.

Moscow rapidly grew in the 16th century, and there were dozens of temporary timber bridges over the Neglinnaya, Yauza, and other small rivers. However, people wanted a permanent structure over the Moskva River as the only crossing from the Kremlin to Zamoskvorechye was made of tied logs. It was one of the most interesting projects at that time, and the Moscovites invited Jogann Cristler from Strasbourg to construct the Greater Stone Bridge with arch spans of 40 arshins[1] (28.44 m) long. If it had been so, the total bridge span would have been about 250 m long, but evidently, only one of the spans was 28 m long, and the rest of them were shorter because the river width was considerably less. 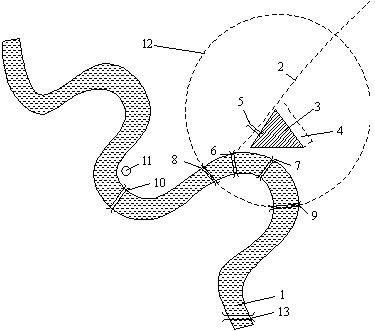 5 – the Trinity Bridge; 6 – the Greater Stone Bridge; 7 – the Moskvoretsky Bridge;

The Greater Stone Bridge, built in 1692 (fig. 4.2a), was 135 m long, 22 m wide and rested on nine arches, with seven of them stood in the water. Its main span was 63 m long and the side spans were 36 m each. The bridge roadway was 16 m wide. The rough stone piers of triangular shape served as starlings during ice drift periods. Big money had been spent and people used to say, “It is costlier than the Greater Stone Bridge” when bargaining with each other. They called the bridge “the eighth wonder of the world” for its architectural merits. It became a favourite strolling place. Besides, it turned into a busy market and ceremonial place because of its proximity to the Kremlin. In 1859, a metal arch structure with three spans on stone piers replaced the old bridge, and 80 years later a steel structure on granite rests appeared. Now the arch spans are made of a highly reliable, low alloy steel, but Muscovites remained faithful to its original name. The total bridge span became four times longer and its roadway, twice as wide as the old one. The main span is 105 m long and 40 m wide. The bridge, constructed in 1932, can carry about 8,000 vehicles, 10,000 pedestrians and 120 trams per hour. The bridge got its attractive cast iron railing (fig.4.2b) added by N. Kolmykov in 1938.

The old bridges could not meet the requirements of the day and eleven new crossings appeared in a fantastically short period of three years. None of the 38 bridges over the Moskva River resembles each other due to their individual engineering and architectural features. The splendid Moscow bridge ensemble built in 1935 – 1938, under the Moscow Master Development Plan, includes the Moskvoretsky, Krymsky (fig. 4.1), Ustinsky, Krasnokholmsky Bridges, etc. The new bridges replaced the old and dilapidated ones. Elements made of high quality steel allowed the structures with longer spans and lower number of piers, opening free shipping channels. The monumental reinforced concrete Bolshoy Moskvoretsky Bridge is strict and faced with pink granite (fig.4.2c). Alexey Shchusev used granite slabs to create an optical illusion of a stone structure. A gently sloping arch supporting the bridge deck is 6.1 m high, and the main span is 92 m long and 40 m wide. The total bridge length with approaching ramps is equal to 554 m. Built by engineer V. Kirilov in 1936-1937 to replace the old narrow structure of 1872, the bridge leads from Red Square to Zamoskvorechye. At present, it is a footbridge, as Red Square is not open to traffic. The beautiful silvery Krymsky Bridge is the only suspension bridge across the Moskva River (fig.4.1; 4.2d). Two steel chains, hung across tall pylons. The chains consist of steel plates, articulated by rivets, and support the structure. The plate depth is 4 cm and the length is 93 cm.

According to one of the legends, one of these rivets is made of pure gold. The total bridge’s length is 668 m including approach ramps that are located on trestles, and its full width is 38.4 m. It is the longest bridge crossing across the Moskva with six traffic lanes and two 5-meter footways. Engineer B. Konstantinov and architect V. Vlasov built the bridge in 1938. Professor K. Yackobson, who held the Chair at Novosibirsk Institute of Railway Engineering for 25 years and headed the “Bridges and Tunnels” Faculty, also took part in its engineering. The bridge was open for traffic even during the deck repairing in 2001.

Many bridges commemorate the glorious victories of the Russian people. The Borodinsky Bridge (fig.4.2e), constructed in 1912, is a memorial to our victory over Napoleon’s troops invading Moscow. The semicircular granite colonnade, two obelisks and bronze memorial plaques bear the names of Russian heroes of 1812. The Roman portico and Russian Imperial coat of arms decorate the bridge. It is the only old bridge in Moscow retaining its original form, though the builders considerably widened it in 1951. Tsar Alexander II, who wanted to commemorate the Battle at Borodino, approved the draft and gave the bridge its name. After the reconstruction in 1999, the bridge looks like an arched structure. The Lefortovsky Bridge, built in 1770, is also one of the oldest Moscow bridges and is a witness to historical events.