Principle of Operation of the Four-Stroke Petrol Engine

The internal combustion engine is called so because fuel is burned directly inside the engine itself. Most automobile engines work on a 4-stroke cycle. A cycle is one complete sequence of 4 strokes of the piston in the cylinder. The operating cycle of the four-stroke petrol engine includes: inlet stroke (intake valve opens), compression stroke (both valves closed), power stroke (both valves closed), exhaust stroke (exhaust valve is opened).

To describe the complete cycle, let's assume that the piston is at the top of the stroke (top dead center) and the inlet and the exhaust valves are closed. When the piston moves down the inlet valve opens to intake a charge of fuel into the cylinder. This is called the inlet (intake) stroke. On reaching the lowest position (bottom dead center) the pis­ton begins to move upward into the closed upper part on the cylinder, (he inlet valve is closed and the mixture is compressed by the rising piston. This is called the compression stroke. As the piston again reaches the top dead center the spark plugs ignite the mixture, both valves be­ing closed during its combustion. As a result of burning mixtures the both valves be­ing closed during its combustion. As a result of burning mixtures the gases expand and great pressure makes the piston move back down the cylinder. This stroke is called the power stroke. When the piston reaches the bottom of its stroke, the exhaust valve is opened, pressure is re­leased, and the piston again rises. It lets the burnt gas flow through the exhaust valve into the atmosphere. This is called the exhaust stroke which completes the cycle. So the piston moves in the cylinder down (intake stroke), up (compression stroke), down (power stroke), up (ex­haust stroke).

The heat released by the fuel is transformed into work so that the reciprocating movement of the pistons is converted into rotary move­ment of a crankshaft by means of connecting rods. 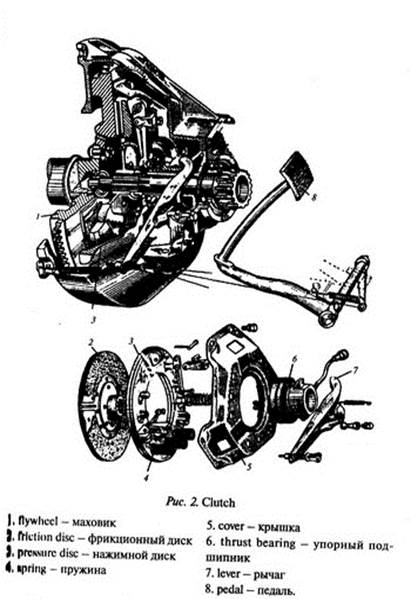 Brakes are used to slow or stop the car where it is necessary. It is one of the most important mechanisms of the car as upon its proper

performance the safety of passengers depends. Car brakes can be di­vided into two types, namely: drum brakes and disc brakes. The drum type may be either a band brake or a shoe brake. Depending on their functions, the automobile has foot brakes and hand brakes (parking brakes). According to their mode of operation, the brakes are classi­fied as: mechanical brakes, hydraulic brakes, airbrakes, electric brakes. Brakes are controlled by the brake pedal.

Most braking systems in use today are hydraulic. This system con­sists of a master cylinder mounted on the car frame and wheel cylin­ders. When the driver pushes down on the brake pedal, it forces the piston to move in the master cylinder and brake fluid is delivered from 11 to the wheel cylinders. The piston movement causes brake shoes to move and the brakes are applied (the brake shoes are pressed against the brake drums).

The air brake uses compressed air to apply the braking force to the brake shoes.

Electric brakes use electromagnets to provide the braking effort against the brake shoes.

Formerly brakes were applied only to the two rear wheels, but now all cars are equipped with all-wheels brakes. Today many improvements are being made in brakes. 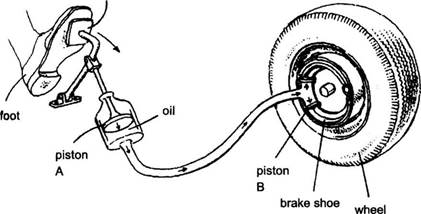