Таbl 5. Estimates of Price Elasticities of Demand in the UK

The table confirms that the demand for general categories of basic commodities, such as fuel, food or even household durable goods, is inelastic. As a category, only services such as haircuts, the theatre, and sauna baths, have an elastic demand. Households simply do not have much scope to alter the broad pattern of their purchases.

In contrast, there is a much wider variation in the demand elasticities for narrower definitions of commodities. Even then, the demand for some commodities, such as dairy produce, is very inelastic. However, particular kinds of services such as entertainment and catering have a much more elastic demand. Small changes in the relative price of restaurant meals and theatre tickets may lead households to switch in large numbers between eating out and going to the theatre, whereas the demand for getting out of the house on a Saturday evening may be relatively insensitive to the price of all Saturday night activities taken as a whole.

A MODEL OF THE ECONOMY

Economists spend a lot of time trying to develop models of the working of the economy. The London Business School, like many universities and also the Treasury, has a model of the economy which it has entered into a computer. The reason for this is that much of its work is concerned with forecasting future economic trends so as to aid decision-making by business and government. The London Business School's model can be fed with economic information, such as changes in tax rates, and it will then predict how the economy will behave. Such predictions are an invaluable aid to business decision-making because, for example, businesses can find out whether people's

incomes are Likely to rise or not.

The complete economy comprises many millions of economic units. There are households, as one kind of unit. There are also firms, and the departments of both central and local government. These units together decide the economy's total spending. They also decide its total income and its total level of production of goods and services. But in order to develop a simple model of the economy we need to ignore the government sector and the possibility of transactions between households and foreigners. Suppose we are dealing with an isolated economy, one which has no government. Let's assume that there are two main sectors in the economy: households and firms. Households supply firms with the factors of production that firms need to carry on their concerns.

Thus,households provide labour services, both skilled and unskilled, in return for the payment of wages. They may also supply land for which they are paid rent. Finally, they might supply the finance, which is essential to the business. If the finance is in the form of a loan they receive interest payments, but if they have purchased shares in the business they may be entitled to a share of the profits. Most households provide some factor services or services of productive/actors, to a public or private business. Anyone at work is providing labour, and if you or someone in your family has bought shares in the privatization programme (in, for example, British Gas, British Telecom or the water authorities) then they have supplied share capital. Households receive payments for these factor services, that is to say, they earn factor incomes, such

as wages, rents and profits.

The other part of our simple model portraysfirms supplying households with all the goods and services that they require. In return for these the households pay the firms. These two sets of actions create the model of the circular flow of money, which is shown in Fig. 3.

In fact, there are two flows. One which is monetary and one comprising goods and' services. A flow of factor services from households to firms for which there is an opposite stream of factor payments and a flow of goods and services, which households pay firms. It is this monetary flow in which we are most interested.

If we assume that all the goods and services, which are produced are in fact sold and that households spend all their income, then we have arrived at what economists call a neutral equilibrium. The level of income, which is spent and received by the two groups will not alter since as one group receives it, they spend it with the other. 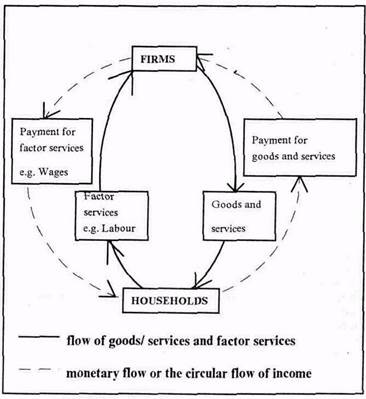 Figure 3. The Circular Flow of Income

The fact that the economy is in a neutral equilibrium means simply that the level of national income, and hence the level of economic activity, are stable and unchanging. (An equilibrium is a point of balance in which there is no inherent tendency to change). If the economy was in equilibrium it does not mean that everyone who wants a job has one or that the country is importing exactly the same value of goods and services as it is exporting.

An injection is simply an addition to the circular flow of income, which does not arise from the spending of households. It was unrealistic to assume earlier that there would be no such additions. These additions or injections will, of course, increase the size of the circular flow and thus the level of activity in the economy. There are three recognized ways in which funds can flow into an economy. They can be generated through: 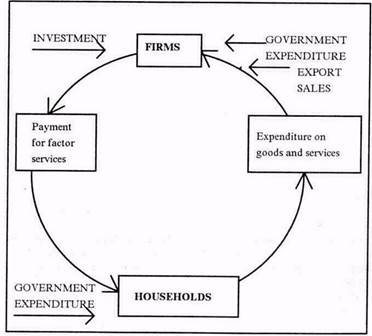 Figure 4. Additions to the Circular Flow of Income