Teaching the minor skills of protection

The side transport, the recall to heel from the blind and the down and search are simply obedience exercises. Once we made the dog realize that to readily obey obedience commands on the protection field is to win bites, the dog can be taught the commands quite easily.

The attacks on handler, on the other hand, are biting exercises. At the judge’s signal, the agitator suddenly attacks the handler and the dog. He charges menacingly at them and, in Schutzhund I, strikes the animal twice with the stick. However, there is no need to teach the dog to bite an attacking man. In drive work we have already accomplished it. Nor is there a need to teach the animal to out after the attack is over, for it has already learned this in field work.

The problem of the attacks on handler is keeping control of the dog before the attacks come. In a Schutzhund trial, whether it is Schutzhund I, II or III, there is a routine to all the exercises, and the attacks are no exception. Certain events occur, every time in the same order and the same way, that predict for the dog that the agitator is about to charge it, and that it is about to get a bite. 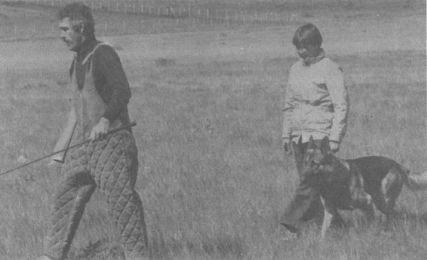 The front transport involves heeling on the protection field, moving a very excited and aggressive animal around the field with nothing but a voice command for control. (Susan Barwig with her first Schutzhund III dog, “Uri.”) 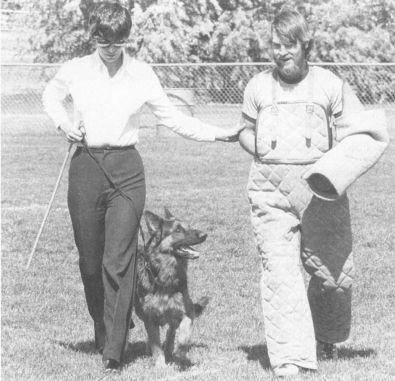 During the side transport the dog must remain vigilant and under control. (Sandi Nethercutt and her young Schutzhund I dog with Mark Chaffin.)

The dog reads the cues, and it anticipates the attack. It becomes progressively more excited and more difficult to control as the moment nears. Finally, when it is nearly completely out of hand, the bite comes and rewards its anticipation. Therefore, with every attack on handler the dog will become more difficult to manage.

During training, we deal with this problem of anticipation of the attacks on handler in two ways:

1. by teaching them as obedience for bites exercises, so that the dog learns that it must heel attentively, looking directly into its handler’s eyes, or there will be no attack and thus no bite.

2. by initiating the attacks at the handler’s discretion , not the decoy’s. The decoy does not simply pick his moment and attack. It is the handler who signals the bite by telling his dog to “Get him!” and he will not do so unless the animal is perfectly controlled and attentive. For his part, the decoy waits to hear the “Get him!” command and then charges at the handler and dog.

Thus, the handler’s voice, face and eyes predict the bite for the dog. Like a motorist who looks up at a traffic light instead of down at the road, the animal tends now to watch its handler rather than the agitator. And when we control its eyes, we control the dog.

GOAL 2: The dog will search the field for the decoy, running around all six blinds rapidly and according to the handler’s instructions.

The blind search, or revier, is in our opinion the most difficult exercise in Schutzhund protection to teach. The exercise depends upon patience and good methodology for success, and to teach it well is a slow and careful project of several months.

Success is seen in a dog that searches the blinds at a dead run, full of drive and lovely to watch, and utterly in its master’s hand. More commonly we see animals that lope or trot apathetically around the first four blinds, and then gain momentum and spirit as they draw near the sixth blind, where they know that they will find an agitator. For these dogs the first five blinds are simply a duty.

Performance of this sort often arises when trainers teach the blind search as strictly an obedience exercise. On the contrary, the revier is, just as much as the hold and bark or the out, a control exercise that involves a ticklish balance between drive and responsiveness to command. The blind search should be a display of obedience driven by intense desire, of control over a dynamic and powerful force.

In our method, there are two distinct stages of training for the revier: an inducive teaching phase and a compulsive training phase.

The inducive phase we call the shell game. Just as the old carnival hucksters used to confound the public with the question “Which shell is the pea under?” we confound the dog with the question “In which blind is the person?” If we do our job well, we eventually convince the animal that the only way it will find the agitator is by following its handler’s directions. 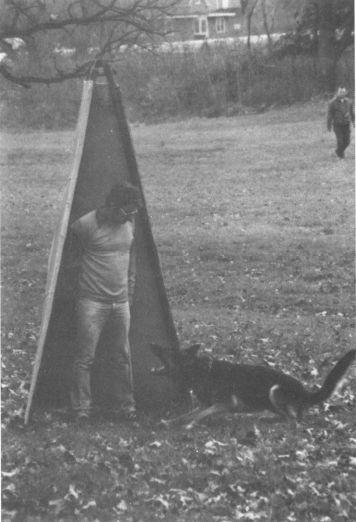 During the revier the dog must search all six blinds on the field under the handler’s direction. When the dog finds the hidden agitator, the animal must detain him by barking aggressively. (Paul Hombach, background, with his Schutzhund III dog.)

By using the shell game we seek to accomplish two important objectives:

1. Teach the dog a clear understanding of and a pattern of habit for the complicated skill involved in the blind search–traveling from one side of the field to the other, crossing its handler’s path and looping around six blinds in succession, starting with either the first one on the left or the first one on the right.

2. Teach the dog to move with spirit and at top speed by

• linking the search directly to its desire to bite.

• making the dog’s expectation of a find and a bite equal for each of the six blinds, so that it goes as strongly to one as it does to the next.

In conventional, purely force‑trained methods, the first five blinds are disjointed from the dog’s desire to bite, because it knows that they are empty. The animal knows that it will find a decoy only in the sixth blind, and it searches the first five simply in order to avoid punishment. Only the last blind represents to it the possibility of a bite, and for this reason the dog runs at only the sixth blind with full spirit. On the other hand, when we use the shell game, and use it well, the dog believes ^hat every one of the blinds may contain an agitator. Because each of the six blinds represents to it an equal possibility for a bite, it searches all of them diligently and with intense eagerness.

With the shell game we arrange the conditions to induce the dog to search the field without resorting to force. When the dog finds the decoy, we made it bark a few times and then we let it bite. In the process it learns not only what we expect, but also the habit of doing it in the manner we want–at top speed and with spirit.

Important Concepts for Meeting the Goal