THE ART OF AGITATION

During basic agitation, the helper’s function is to serve as the dog’s adversary in order to intensify the animal’s drives and desire to bite. It is the decoy’s responsibility to increase the dog’s courage and confidence, and also to modulate precisely and with split‑second timing between the moods of defense and prey.

He modulates between prey and defense by changing his posture and his attitude so that the dog responds differently to him from one moment to the next. He causes the moods of prey and defense in the animal and then attracts the behaviors that they drive toward himself.

The attraction for prey drive is primarily movement. When the decoy moves laterally or away from the dog, especially in a jerky or erratic fashion, he excites the animal’s predatory instincts, and the animal begins to hunt him. The dog pursues the decoy as though he were a big rabbit, and the desire to bite awakens.

The attraction for defense is threat. Dogs have many ways of conveying threat to each other, and the agitator must understand them all. Dogs communicate with gestures, postures and movements. Human beings also use this nonverbal or body language. A good decoy is in touch with body language. He grasps how people use movements and postures to communicate, and he understands how human body language must be subtly altered in order to convey his intent to the dog.

First and foremost, for a dog, and throughout much of the animal kingdom, threat is made through eye contact. For example, baboons have bright patches on their eyelids that emphasize their eyes and the threat that they represent; some butterflies have great dark spots on their wings that frighten predators because they mimic eyes; and human prizefighters stare impassively into each other’s eyes before a bout.

Another canine threat is immobility, stillness. Who has not seen how slowly dogs move when they confront one another and how perfectly still they stand, staring fixedly at each other? Thus, the more still the decoy remains as he stares, the more threatening he will seem. 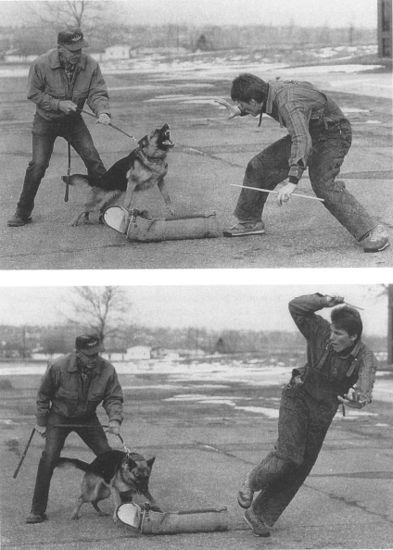 The agitator rewards defensive behavior with retreat. The animal is incited by threatening. When it “counters,” defending itself and the prey powerfully, the agitator flees. Note the change in expression from defense to prey and the renewed interest in the sleeve after the agitator retreats.

Animals also threaten through inflation of body size. When they feel endangered, owls extend their wings and flare their feathers; some species of lizards gape their mouths and extend great shields of skin around their heads and shoulders; and cats and dogs pilo erect (raise the fur on their backs). A gifted decoy can achieve the same effect by expanding his chest and lungs, drawing himself erect and letting his elbows rotate out from his sides.

The decoy uses a combination of these elements of threat, as well as movement directly toward the animal, to alarm the dog and attract defensive behavior. A truly gifted decoy can sense just what combination to use with each dog at the right moment to make it “come out.”

However, the helper does not merely pressure the dog. He must also encourage it. By rewarding the animal’s efforts, he can intensify drive and induce the dog to become more and more confident about behaving aggressively.

The agitator rewards prey behavior with movement and by allowing the dog to bite. He starts the dog with a little motion, and then moves more and more quickly and erratically in response to the dog’s pursuit. As the animal begins to become excited, the decoy feeds on this energy, becoming more and more frenetic and intensifying still further the animal’s desire to catch him. At a peak moment, when the aroused dog is putting out an intense effort, the decoy rewards it by allowing a quick bite on a rag or sleeve.

The decoy rewards defensive behavior with retreat, by yielding to the dog’s counterthreat. He first incites the animal by threatening it. Then the dog, alarmed, threatens back and the agitator rewards its attempt to defend itself by running away. The dog learns that it can shatter the decoy’s threat by threatening back.

When the decoy returns, he threatens a little more strongly and the dog, emboldened by its recent success, will lash out at him more intensely. Progressively, we teach the animal to withstand a greater and greater threat.