The digestive system consists of many parts. They are the oral cavity, esophagus, stomach, small and large intestines, the liver, the pancreas, gallbladder and others.

The first division of the digestive tract is the mouth, or oral cavity. Important structures of the oral cavity are the teeth, the tongue, the soft and hard palates, and salivary glands. Digestion begins when the person chews the food. The food is broken into smaller pieces by the teeth and is mixed with saliva secreted by the salivary glands.

The esophagus opens into the stomach. It rests in the upper abdomen. It is a dilated portion of the digestive tract. The stomach receives food from esophagus, and its mixing action reduces the food to a semi-liquid mixture. The stomach walls contain many glands from which acid and enzymes are released into the stomach and mixed with ingested food. 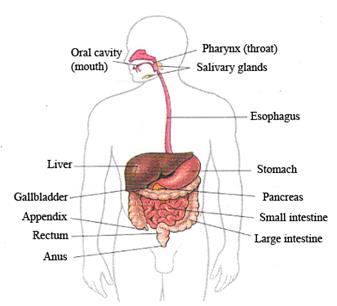 The heart is a hollow muscle located in the thoracic cavity between the lungs. The heart is responsible for the circulation of the blood. It is known that the heart is a pump. But it is an extraordinary pump. It weighs only about a pound but the heart of a healthy 70-kg person pumps about 7200 L of blood each day at rate of 5 L per minute. If the heart loses its ability to pump blood for even a few minutes, the life of the individual is in danger.

The heart actually has two pumps. Each pump consists of a pair of chambers formed by muscles. The contraction of these muscles causes the blood to be pumped. The lower chamber is called a ventricle and the upper chamber is called an atrium. The four chambers of the heart are separated by valves. Between the right atrium and the right ventricle there is a one-way valve, called the tricuspid valve. The valve that separates the left atrium from the left ventricle is called the mitral (or bicuspid) valve. The left ventricle is separated from the right ventricle by the interventricular septum.

The tissue of the heart consists of three lay­ers. The exterior layer is the thin epicardium. The middle layer is the myocardium, the heart muscle itself (from the Greek myo for "muscle" and kardia for "heart"). The inner lining of the heart is the endocardium, a thin, smooth structure. The pericardium is a fibrous sac that surrounds the heart. In the space between the pericardium and the epicardium there is a small amount of fluid.

The heart rate varies depending on activity at any given moment. The control mechanism for the heart rate involves electrical impulses. One of the four chambers of the heart, the right atrium, contains a group of cells called the sinus node. The sinus node produces electrical impulses that signal the muscle of the heart to contract in the pumping cycle. When a person is at rest, the heart pumps more slowly and at a regular rate, about 60 to 80 beats per minute. When a person runs, climbs stairs, or otherwise exert yourself, the sinus node issues electrical “instructions” to increase the pace of the heart in order to provide the muscles and other tissues with the necessary additional blood and its supply of oxygen. The heart rate may increase up to 200 beats per minute if you exert yourself strenuously.

The heart rate may be affected by various factors including tobacco use, caffeine-containing foods, alcohol, and a number of drugs. In addition, the cardiac disorders may produce heart rate problems.