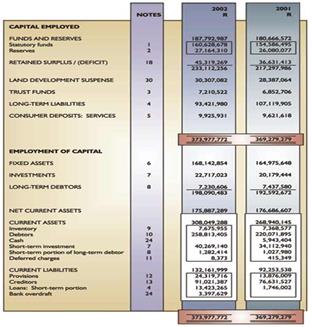 A balance sheet describes the resources that are under a company's control on a specified date and indicates where these resources have come from. It consists of three major sections: the assets, the liabilities and the owners' equity. The list of assets shows the forms in which the company's resources are lodged; the lists of liabilities and the owner's equity indicate where these same resources have come from. The balance sheet shows the company's resources from two points of view, and the following relationship must always exist: total assets equals total liabilities plus total owner's equity. Assets are ordinarily subdivided into current assets and noncurrent assets. The former include cash, amounts receivable from customers, inventories, and other assets that are expected to be consumed or can be readily converted into cash during the next operating cycle. Noncurrent assets may include noncurrent receivables, fixed assets (such as land and buildings), and long-term investments.

The owner's equity is divided between paid-in capital and retained earnings. Paid-in capital represents the amounts paid to the corporation in exchange for shares of the company's preferred and common stock. The amount of retained earnings is the difference between the amounts earned by the company in the past and the dividends that have been distributed to the owners.