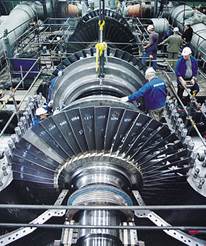 The basic advantage of the turbine over other forms of prime movers is the absence of any reciprocating parts. With only rotating motion involved, high speeds are attainable. Since power is directly proportional to torque, times speed, an increase in the rotative speed materially decreases the value of the torque required for a given power output. A decrease in the required torque permits a reduction in the size of the prime mover by reducing the length of the torque arm or the force acting on the torque arm. Also, with the absence of any reciprocating parts, vibration is greatly minimized. Owing to the high rotative speeds available with relatively little vibration, the size and cost of the driven machinery, of the building space, and of the foundations are greatly reduced. These advantages are most apparent in large prime movers and permit the steam turbine to be built in sizes of over 350,000 hp in single units, and 760,000 hp in compound units.

1. It transforms a portion of the energy of the fluid, acquired in the heat exchanger and evidenced by a high pressure and temperature, into kinetic energy.

For the first function to be performed efficiently, the nozzle walls must be smooth, streamlined, and so proportioned as to satisfy the changing conditions of the steam or gas flowing through the nozzle.

For the second function the nozzle should discharge the fluid at the correct angle with the direction of blade motion to allow a maximum conversion of kinetic energy into work.

The main consideration in nozzle design is to provide a nozzle of proper wall contour. The contour of the walls depends upon the conditions of the fluid required by the turbine and upon certain properties of the fluid which are influenced by these established conditions. For nozzle de­sign the engineer has at his disposal[13] four fundamental tools or relations. They are: 1) the first law of termodynamics; 2) the equation of continuity of flow ; 3) the characteristic equation of state of the fluid; 4) the equation of the process.

Both classes of equipment in various forms may be found in the modern stationary power plant or small mobile power plants such as the aircraft engine, Diesel locomotive, or automobile engine.