1. Procedural Step. Sanitize your hands, and assemble the equipment.

3. Procedural Step. Introduce yourself, and explain the procedure.

4. Procedural Step. Position the patient as required. Adjust the light so that it is focused on the wound. 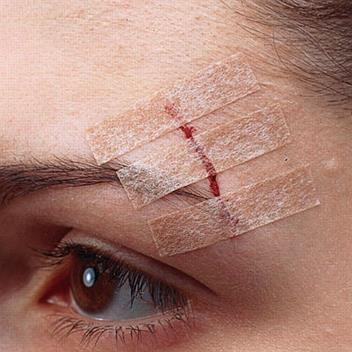 5. Procedural Step. Gently scrub the wound using an antiseptic solution and a sterile gauze pad or a surgical scrub brush. Clean at least 3 inches around the wound , making sure to remove all debris, skin oil, and exudates. Allow the skin to dry or pat dry with gauze squares.

6. Procedural Step. Cleanse the site using antiseptic swabs such as Betadine or alcohol swabs. Clean the wound from the top to the bottom, working from the center to the outside of he wound.

b) Peel back the package until it is completely open.

c) Lay the opened package flat on a clean dry surface. The inside of the package serves as sterile field.

9. Procedural Step.Apply sterile gloves. Fold the card of strips along its perforated tab and tear off the tab, whish exposes the ends of the strips, making them easier to grasp. Peel a strip of tape off the card at a 45-degree angle to the card.

10. Procedural Step.Check to make sure the skin surface is dry. Position the first strip over the center of the wound as follows:

a) Secure one end of the strip of tape to the skin on one side of the wound by pressing down firmly on the tape.

b) Stretch the strip transversely across the line of the incision until the edges of the wound are approximated exactly.

If necessary, use your gloved hand to assist in bringing the edges of the wound together.

c) Secure the strip on the skip on the other side of the wound by pressing down firmly on the tape.

12. Procedural Step. Apply two closures approximately Yi inch from the ends of the strips and parallel to the wound (ladder fashion).

13. Procedural Step. Apply a dry sterile dressing over the strips if indicated by the physician (see Procedure 10-5).

14. Procedural Step. Remove the gloves, and sanitize your hands.

15. Procedural Step. Instruct the patient in wound care as follows:

a) Provide the patient with written wound care instructions.

b) Explain the wound care instruction and ask the patient if he or she has any questions.

c) Ask the patient to sign the instruction sheet on the appropriate line.

d) Witness the patient's signature by signing your name in the appropriate space on the form. Include today's date,

e) Give a signed copy of the wound care instruction to the patient and file a copy in the patient's medical record.

16. Chart the procedure. Include the date and time, the appearance of the wound, wound preparation, the number of strips applied the location of the wound, and care of the patient about wound care.


While John Smith was going to school this morning, a car knocked him down. His right leg was broken just below the knee. Some people who saw the accident laid him in a comfortable position on the pavement and tele­phoned for an ambulance. John was badly shocked and in great pain. While the people were waiting for the am­bulance, the driver of the car that knocked John down covered him with a coat and tried to comfort him.

When the ambulance arrived, John was lifted onto a stretcher, put into the ambulance and driven to a hos­pital that was not far away. When he arrived at the ca­sualty department, he was admitted. The nurse who admitted him gave him an injection of morphine to combat the shock and the pain. The doctor who exam­ined him comforted him and told him everything would be all right. While the doctor was examining him, the nurse who had admitted him took his pulse and blood pressure. No antitetanus injection was necessary as John had been immunized against tetanus six months earlier.

As John's wound was lacerated and contused, he was given an antibiotic to prevent the onset of infection. He was then taken to the X-ray department. While the X-ray examination was being carried out, John's parents arrived at the hospital. The doctor who examined John told them that John had sustained a compound fracture of the tibia and fibula. He explained that an operation was necessary and asked Mr Smith to sign a consent for operation form. Mr Smith signed the consent form while Mrs Smith was giving John's personal particulars and previous medical history to the nurse. Before John's parents left the hospi­tal, they were told when they could visit him and were given a list of things that he would need.

While John was waiting to go to theatre, a quarterhourly record of his pulse and blood pressure was kept and he was given a suitable premedication. 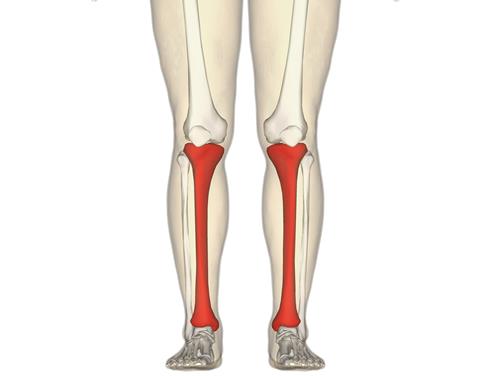