Which way to the moon?

Reginald Turnhill was BBC correspondent at NASA from 1956 onwards. He described the different routes to the Moon and how NASA decided which one it would take:

It was only 18 days after Gagarin became the first human in orbit that President Kennedy announced, in May 1961, that the United States proposed to land a man on the Moon and bring him safely home before the end of that decade. He said that they would do it, not because it was easy, but because it was “hard”!

Too right, thought NASA’s top managers! At that time the youthful National Aeronautics and Space Administration had only vague theories as to how such a landing could be accomplished. Despite the confident 10‑year programme which had so impressed me and many others, their scientists and technicians had actually achieved only one 15‑minute manned space log; and while Project Apollo had been announced 10 months earlier, its stated aim was merely to fly men around the Moon – “a circumlunar mission” – without landing.

The President’s “deadline” led to some rather desperate planning. Sending men to the Moon was relatively easy; the difficult part was bringing them back again. Two Lockheed engineers proposed that an astronaut should be sent on a one‑way trip and left there, with food, oxygen and other supplies being rocketed to him for several years while methods and equipment were devised for bringing him back. This solution was still being advocated in June 1962 by Bell Aerospace engineers, who pointed out that while he was waiting the astronaut could perform valuable scientific work. It would be a hazardous mission, they conceded, but “it would be cheaper, faster, and perhaps the only way to beat Russia.” NASA’s historians say there is no evidence that their administrators ever took such a plan seriously; but they did listen to it, and it is recorded.

NASA had inherited from the US Air Force a general assumption that “direct ascent” was the way to get to the Moon. As explained earlier, the USAF had decided some years before that a manned base on the Moon was desirable for defence reasons, and had been working on a plan for a lunar expedition called Lunex since 1958. They thought they could send three men there and back in a huge three‑stage rocket called Nova, providing an initial thrust of 12 million lb – almost twice as big as the projected Saturn 5.

Nova was the largest of a series of rocket designs proposed by Dr Wernher von Braun and his team of German rocket engineers. Von Braun had always supported direct approach as the best way to get men to the Moon. Although rendezvous and docking techniques in Earth or lunar orbit were much discussed, practical tests were a long way off, so no one was sure that they would work. The weakness of direct approach, on the other hand, was that a huge weight – the whole third stage of the rocket – had to be slowed down for the lunar landing, still carrying enough propellant to re‑launch part of itself and its crew on the return journey to the Earth.

To lessen the landing weight, a lunar surface rendezvous had been proposed. For that an unmanned tanker vehicle would be sent first – but then the problem was that the manned lander must touch down near enough for the astronauts to transfer the tanker’s fuel. That in turn required that the final landing would have to be controlled by the onboard astronauts. But how would they be able to see the surface from the pointed top of the rocket, with their sloping windows looking skywards? Mirrors, periscopes, TV and even hanging porches were proposed, and a lot of time was wasted on this concept until it was finally agreed that it would not work. It was also felt that developing a rocket as large as Nova would take far too much time. 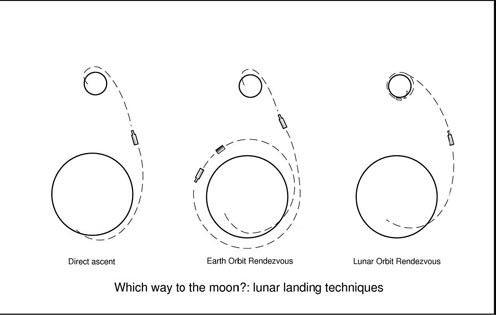 Assembling rockets and spacecraft in either Earth orbit or lunar orbit were repeatedly proposed as solutions, because this could be done by multiple launches of one or more of seven alternative variations of von Braun’s proposed Saturns. But von Braun himself was still describing any rendezvous proposals as “premature” at meetings in February 1962.

John Houbolt, assistant chief of the Dynamics Load Division at the Langley Research Center, had been arguing the case for LOR, as lunar orbit rendezvous soon became known, quite passionately since 1960. He maintained that if a simple spacecraft could be dropped off to land two astronauts on the Moon and then bring them back to the parent craft waiting in lunar orbit, enormous weight savings would be achieved. It would no longer be necessary to take the heavy Apollo craft, with its heatshield and fuel for the return flight to Earth, down to the lunar surface. Lowering all that weight and lifting it off again consumed many tons of propellant which could all be saved.

But the disadvantages – that such a lightweight ferry could place only a small payload on the Moon, and, worst of all, if its lift‑off were less than perfect it would miss its rendezvous with the parent craft and doom the astronauts to a slow death – meant that this option was not seriously considered.

By contrast, a missed rendezvous in Earth orbit would merely mean a failed mission, with the astronauts being brought safely home. So Houbolt’s arguments that LOR was much simpler than EOR, and that his plan meant taking 7000 pounds (3,200 kg) instead of 150,000 pounds (68,000 kg) down to the lunar surface, were at first discounted.

Slowly, however, the Manned Spacecraft Center at Houston, led by Brainerd Holmes, who was brought in to head the programme after successfully completing the then RCA’s Ballistic Missile Early Warning System (during which air and defence correspondents like myself had been immensely impressed by his abilities), were won over to LOR. Its over‑riding advantage was that only one Saturn 5 rocket would be needed for a complete moonlanding mission instead of two for EOR, and the savings in time and cost were enormous. It soon became clear that it was the only way in which a moonlanding could be accomplished within the decade.

But the Marshall Space Flight Center at Huntsville stubbornly adhered to its view that EOR was the way to go. Brainerd Holmes decided that von Braun must be won over. A shrewd negotiator, he realised that LOR would mean a substantial loss of work for the rocket centre, so he arranged for his deputy, Joseph Shea, to invite von Braun to Washington to point out to him that, if EOR were chosen, Houston would be overloaded with work. “It just seems natural to Brainerd and me that you guys ought to start getting involved in the lunar base and the roving vehicle, and some of the other spacecraft stuff.”

NASA’s historians say that Wernher, who was known to have wanted for a long time to get into spacecraft design and not be confined to launch rockets, “kind of tucked that in the back of his mind and went to Huntsville”.

Two months later came the conversion. At an all‑day conference in June, when a final decision was desperately overdue, all the presentations by von Braun’s lieutenants still favoured EOR. Their German leader sat listening and making notes for six hours. Then he got up and made a 15‑minute speech which shocked his staff but finally settled the issue. “Our general conclusion,” he said, “is that all four modes [under discussion for reaching the Moon] are technically feasible and could be implemented with enough time and money.” He then listed what he called “Marshall’s preferences”: 1) lunar orbit rendezvous; 2) Earth orbit rendezvous, using the refuelling technique; 3) direct flight with a Saturn 5, using a lightweight spacecraft and high energy propellants; and 4) direct flight with a Nova or Saturn C8 rocket.

His staff listened open‑mouthed while von Braun said he readily admitted that when first exposed to the LOR proposal they were “a bit sceptical”, but so was the Manned Spacecraft Center at Houston. It had taken quite a while to substantiate the feasibility of the method and finally endorse it. So it could be concluded that the issue of “invented here” or “not invented here” did not apply to either of the centers; both had actually embraced a scheme suggested by a third source!

Shea’s headquarters staff then costed the four contending modes of approach to the Moon, and reached the satisfying conclusion that LOR would cost almost $1.5 billion less than either EOR or direct flight – $9.5 billion versus $10.6 billion. On 11 July 1962 the media was told at a news conference that the NASA centers were unanimously of the opinion that a moonlanding was to be accomplished by means of a lunar orbit rendezvous. Not for the first time, nor the last, the abrupt change of policy came as a shock to space correspondents like myself. In this case we had been subjected to innumerable briefings stressing the hazards of such an approach. But Brainerd Holmes told the American Rocket Society a few days later: “Essentially we have now ‘lifted off’ and are on our way.” Events proved that he was right.

The Soviets planned to use the Earth orbit rendezvous technique to assemble a larger spacecraft. This would then take their cosmonauts to the moon.