FUN WITH HYDROGEN AND METHANE 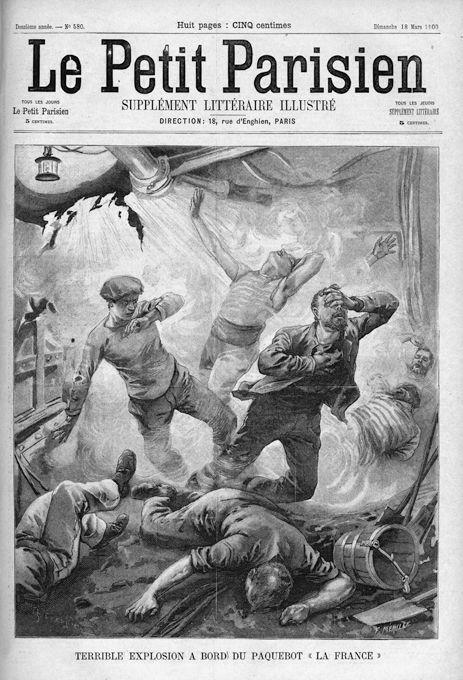 L ONG BEFORE ANYONE put a cautering wand up anyone else’s patoot, the dangers of flammable[80]bowel gas were well known. If you let manure sit, as any farmer can tell you, bacteria will break it down into more elemental components. Some of these are of value to farmers as fertilizer, which they can pump from their manure pit out onto their crops.[81]Others–hydrogen, say, and methane–will blow the roof off the hog barn. Here is the Safe Farm Program channeling Beatrix Potter in a methane‑safety radio spot: “It has no smell. It has no color. It often lurks about, but fails to leave a trace.”

Methane and hydrogen are explosive in concentrations higher than 4 to 5 percent. The foam on liquid manure in pits is 60 percent methane. Farmers may know this, but their families sometimes don’t. Which explains why the University of Minnesota Extension Service’s farm safety curriculum includes instructions for a children’s classroom Manure Pit Display. (“You will need:… toy cow, pig, and bull [1/32 scale], an aquarium, one pound of dry composted manure… and chocolate kisses… to simulate manure on top of floor [optional].”)

Like a Manure Pit Display, the human colon is a scaled‑down version of a biowaste storage tank. It is an anaerobic environment, meaning it provides the oxygen‑free living that methane‑producing bacteria need to thrive. It is packed with fermentable creature waste. As they do in manure pits, bacteria break down the waste in order to live off it, creating gaseous by‑products in the process. Most voluminously, bacteria make hydrogen. Their gas becomes your gas. Up to 80 percent of flatus is hydrogen. About a third of us also harbor bacteria that produce methane–a key component in the “natural gas” supplied by utility companies. (At least two‑thirds of us harbor a belief that methane producers’ farts burn blue, like the pilot light on a gas stove. Sadly, a YouTube search unearthed no evidence.)

The flammability of methane and hydrogen is part of the reason for the seeming overkill of protracted bowel‑cleansing that precedes a colonoscopy. When gastroenterologists find a polyp during a screening, they will usually remove it while they’re in there, using a snare with an electrocoagulating option to staunch the bleeding. They do not want to worry about igniting a rogue pocket of combustible gas–as happened in France, in the summer of 1977, to fatal effect.

At a university hospital in Nancy, a sixty‑nine‑year‑old man arrived at the Services des Maladies de l’Appareil Digestif (French for “Gastroenterology Department”). With the current set to 4, the doctor began a simple polypectomy. Eight seconds into it, an explosion was heard. “The patient jerked upwards off the endoscopy table,” reads the case report, and the colonoscope was “completely ejected” (French for “launched from the rectum like a torpedo”).

What was strange was that the Frenchman had followed his colonoscopy prep instructions to the letter. The culprit, in this case, had been the laxative. The staff had prescribed a solution of mannitol, a sugar alcohol similar to sorbitol, the likely laxative agent in prunes. Though the man’s colon contained no fecal matter, it still contained bacteria, hungry bacteria that feasted on the mannitol and produced enough hydrogen to set the stage for an internal Hindenburg scenario. A study done five years later found potentially explosive concentrations of hydrogen or methane, or both, in six out of ten patients prepped with mannitol.

This is no excuse for putting off your colonoscopy. Mannitol is no longer used, and doctors routinely blow air or nonflammable carbon dioxide into the colon as they work, which dilutes any pockets of hydrogen or methane. (Inflating the colon also helps them see what they’re doing. And creates the magnificent, billowing flatulence that rings through the colonoscopy recovery room.)

Outside the body, intestinal hydrogen and methane pose no danger. The act of passing flatus dilutes the gases, mixing them with the air in the room and lowering the concentration to levels well below combustibility. As anyone who has typed pyroflatulence into YouTube is aware, the match would have to contact the gas the second it’s blown from the body.

In the early days of the space program, NASA fretted about flammable astronaut flatus building up inside the tiny, hermetically sealed space capsules. A researcher presenting at the 1960s conference “Nutrition in Space and Related Waste Problems” was concerned enough to suggest that astronauts be selected from “that part of our population producing little or no methane or hydrogen.” NASA used to keep flatus expert Michael Levitt–whom you’ll meet shortly–on retainer as a consultant. Levitt assured them the capsules were large enough and the air inside sufficiently well circulated that intestinal contributions of hydrogen and methane were unlikely to reach a dangerous concentration. NASA was understandably wary. An earlier decision to circulate 100 percent oxygen in the capsules led to the deaths of all three Apollo 1 astronauts when a spark ignited a fierce fire during a launch‑pad test.

E ARLY ONE MORNING in the winter of 1890, a young British factory worker leaned from his bed to check the time. It was not yet dawn, the streets of Manchester still dark and shuttered. As he struck a match to see the hands of his timepiece, he happened to emit a belch. “To his consternation,” wrote Dr. James McNaught in the British Medical Journal , “the gas took fire, burned his face and lips considerably, and set fire to his moustache.”

Cases of “inflammable eructation”–McNaught cites eight other cases–are perplexing. The gas in a typical belch is either carbon dioxide (from carbonated drinks) or air swallowed while eating or drinking, both nonflammable. The healthy human stomach, unlike the colon, does not produce hydrogen or methane. Gastric acid’s job is to kill microorganisms; without them there can be no hydrogen‑ or methane‑producing fermentation. Even if a relative few bacteria survive in a stomach–and some species can, we now know–the chymified food is passed on to the small intestine too quickly for fermentation to make much headway.

McNaught reached for his stomach tube. It had been five hours since the factory worker ate, a time lag normally sufficient for the stomach to finish its duties and pass the chyme along to the small intestine. Yet up came a pint and a half of a sour‑smelling, soupy matter with a sediment of “grumous[82]remains of food.” And gas, lots of it, visible as a head of frothy bubbles, foaming and bursting like the contents of a mad scientist’s beaker.

To identify the gas and confirm its flammability, McNaught had only to collect some from the headspace of the beaker and set it alight. But that’s no fun. Instead, on a different day, McNaught had the man yet again visit his office. Through a tube, he poured water into the misbehaving stomach, to displace the gas. As he did so, he held a flame to the invisible plume issuing from the man’s mouth. “The result… was to produce a flame of dimensions alarming to both the patient and myself.” Maybe I’m projecting, but a poorly suppressed schoolboy glee occasionally surfaces in McNaught’s writing, setting it off from the typical Hippocratic benevolence of British Medical Journal prose. If I had a medical license, I fear I’d be a Dr. McNaught.

It turned out that owing to strictures of the pylorus, the stomach’s lower sphincter,[83]the food in the young man’s stomach was held back an uncommonly long time. Plus, McNaught claimed to have cultivated strains of acid‑resistant, gas‑producing bacteria. Carbohydrates plus bacteria plus time and body heat equals fermentation.

The story made me curious about cows. As we learned earlier, the rumen is a vast fermentation pit, a massive bacterial slum. A grazing cow can produce a hundred gallons of methane a day, vented, as stomach gases typically are, through the mouth. You would think that cow‑belch‑lighting would rival cow‑tipping as a late‑night diversion for bored rural youth. How is it that growing up in New Hampshire I never heard a cow belch? My ag pal Ed DePeters had the answer. When a ruminant is feeling bloated and needs to make room in her rumen, she pushes out some methane, but instead of belching it up, she can shift her internal tubing to reroute the gas down into the lungs and then quietly exhale it. To, say, a pronghorn out on the savannah, quiet can be key to survival. “Ungulates in the wild tend to go off and hide someplace while they ruminate,” DePeters explained. “If a lion walks by and hears a loud urrp …” Sayonara , antelope.

Because my readers, perhaps more than anyone else’s, might be inspired to head out to the pasture with a lighter in their pocket and bovine malfeasance in their heart, let me add this: lighting a cow’s breath will not produce a McNaughtian geyser of flame. Because of the afore‑described methane rerouting system, the gas is diluted by nonflammable gases in the breath. For ignition, you would need the sort of concentrated blast that is a belch. And cows don’t belch.

Snakes don’t either, but they can, under certain circumstances, create an inflammable eructation of literally mythical proportions. For this story, we leave Ed DePeters in his muck boots and feed cap and turn to our snake digestion man in Alabama, Stephen Secor. First, a little background: Many plant‑eating animals lack rumens, so some fermenting takes place in the cecum, an anatomical pouch at the junction of the small intestine and the colon. These same plant‑eaters–horses, rabbits, koalas, to name three–tend to have a larger‑than‑average cecum. Pythons and boas do too, which struck Secor as odd, because they’re carnivores. Why, he wondered, would a meat‑eater need a vegetation digestion unit? Secor theorized that perhaps these snakes had evolved ceca as a way to digest and take advantage of plant matter inside the stomachs of their prey.

To test his theory, Secor fed rats[84]to some of the pythons in his lab at the University of Alabama and hooked them up to a gas chromatograph. He tracked the hydrogen level in their exhalations as they digested whole rats over the course of four days. He did see a spike, but it appeared long before the rat arrived at the python’s cecum. Instead, Secor suspected, the hydrogen spikes were the result of the decomposing, gas‑bloated rat bursting inside the python. “One thing led to another.” (Secor’s way of saying he popped a bloated rat corpse and measured the hydrogen that came off it.) Suspicion confirmed. The hydrogen level was “through the roof.” Secor had stumbled onto a biological explanation for the myth of the fire‑breathing dragon. Stay with me. This is very cool.

Roll the calendar back a few millennia and picture yourself in a hairy outfit, dragging home a python you have hunted. Hunted is maybe the wrong word. The python was digesting a whole gazelle and was in no condition to fight or flee. You rounded a bend and there it was, Neanderthal turducken. Gazython. The fact that the gazelle is partially decomposed does not bother you. Early man was a scavenger as well as a hunter. He was used to stinking meat. And those decomp gases are key to our story. Which I now turn over to Secor.

“So this python is full of gas. You set it down by the campfire because you’re going to eat it. Somebody kicks it or steps on it, and all this hydrogen shoots out of its mouth.” Hydrogen, as the you and I of today know but the you and I of the Pleistocene did not know, starts to be flammable at a concentration of 4 percent. And hydrogen, as Stephen Secor showed, comes out of a decomposing animal at a concentration of about 10 percent. Secor made a flamethrowery vhooosh sound. “There’s your fire‑breathing serpent. Imagine the stories that would generate. Over a couple thousand years, you’ve got yourself a legend.” He did some digging. The oldest stories of fire‑breathing dragons come from Africa and south China: where the giant snakes are.