(1) The upper and lower runs of the chain are supported on a structural steel frame. The chain is driven from the stoker front by means of sprockets mounted on a rotating shaft which is actuated by a ratchet mechanism and hydraulic cylinder. The grate bars are made of heat-resistant cast iron, are cooled by the air supplied for combustion, and form a flat undisturbed surface for the fuel bed. 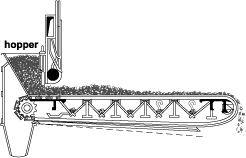 Coal from the stoker hopper is placed on the moving grate in a uniform layer, the depth of which is controlled by the vertical movement of an adjustable fuel gate. The depth of the fuel bed is usually between 3 and 8 in. depending upon the kind of fuel being burned. (2), so that the combustible material is burned before the ash is discharged from the rear end into the ashpit.

The shearing action of adjacent grate bars as they pass around the curved supporting member at the rear of the stoker provides a self-cleaning action for the grate bars. (3) Thus the supply of air to various sections of the fuel bed may be adjusted to suit the combustion requirements.

When bituminous rand other high-volatile coals are burned, high-velocity air jets are installed in the front furnace wall. The volatile matter that is released from the incoming green coal is mixed with the swirling turbulent air that is introduced above the distillation zone. Two important results are thereby accomplished: 1) the volatile matter is burned smokelessly, and 2) a high-temperature zone is formed which provides for stable ignition of the incoming coal. (4)

The small sizes of anthracite which cannot be sold for a domestic fuel and the small sizes of coke which are too small to charge into the blast furnace, called coke breeze, are important stoker fuels in certain localities. (5) Because of the fine size and large total surface of the incandescent carbon in the fuel bed, all the oxygen combines with carbon a short distance above the grate unless fuel-bed air velocities are so high as to almost lift the fuel from the grate. (6)

It is necessary to maintain a hot zone above the entering fuel to ignite the fuel on the grate. Accordingly, (7)

The net effect is to maintain a hot zone over the incoming fuel and to blow the fine particles of carbon onto the front of the stoker so as to assist ignition and retain them in the combustion zone until they are burned. Over-fire air injection and a high furnace (8)

The travelling-grate stoker is similar in general appearance and operation to the chain-grate stoker except that individual grate bars or keys are mounted on carrier bars which extend across the width of the stoker and are attached to and driven by several parallel chains. Since adjacent grate bars have no relative motion with respect to each other, (9) and (10)